We’re delighted to have a guest post from Suzy of Maman Poulet today.  Maman Poulet is well known on the Irish blogging scene as one of our most clear-headed and hard-hitting political bloggers.

Suzy blogs as Maman Poulet about politics, current affairs and all sorts. She lives and works in Dublin North Inner City.

Madina started life as a shop on Moore Street run by a family where a mother made home made food sold in the shop which then turned the back of the shop into a hot food deli. The place was always busy. The shop has moved to Parnell Street and the deli has become a restaurant on Mary Street.

We found Madina two years ago and visit there often (far too often!!). It’s the best butter chicken in Ireland that has me returning (€8.95,) but in fact the rest of the very extensive menu is something worth working through and there are deals for Chicken curry, rice and naan for under €10. Curries can be served sweet, medium or spicy. Vegetarians in particular are well catered for and they have separate facilities for preparing vegetarian food also. Service is prompt and friendly and no alcohol is served. There is food on the Madina menu thats not available anywhere else in Dublin including dosas which are served with a range of fillings and chutneys. I bring friends there a lot to show them that Indian food can be both cheap and delicious. I call it a canteen but thats not a denigration – it’s not a place you sit around all night but it’s not meant to be like that and does not suffer for it. The other thing is that the South Asian community in North Dublin’s Inner City and beyond flock there in their droves so you know you are in good company.

This restaurant opened about 6 months ago and looks like a pub but is actually a brasserie and the emphasis is firmly on the food. In the months since it opened the menu has had changes to suit customer need and indeed pockets. Now there is a range of main courses like pork and leek sausages, herb mash and onion marmalade for €10 or steak, chips and rocket salad for €12.50. Grilled sole and pork belly also star on the menu. Salads are a really good filling option with smoked salmon and shrimp or smoked duck and spiced pear being personal favorites. There’s soup and paninis at lunch time also to compliment the bistro options. Service is excellent and there is great attention to detail in the food presentation. For special occasions there’s a selection of cocktails and a good range of beers to compliment the very tasty grub.

This is a Turkish sandwich bar which recently moved to the middle open section in the food hall. It is the only place in the food hall one can get cake/dessert – but that not why I go there! A large Grilled Chicken Baguette – cooked to order on a griddle complete with fresh bread roll (no parbaked rolls here) salad, sauces, fried onions (yum!) served with chips and a soft drink for €7.45! There is also a similar deal for a steak baguette or a Moonstar special with salami and sausages. Freshly made salads and stuffed baked potatoes are also available. The family run business is also one of the friendliest most welcoming outlets in town never mind the food hall and they bring your order to your table with a smile. 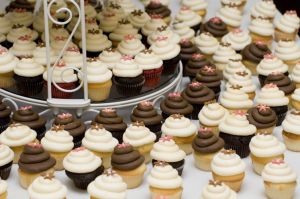 Cupcakes etc. – I’ve seen the stall in the Ilac Centre but Dublin’s Northside Inner City lacks a place to pick up some good baking from decent cream cakes to sourdough and cup cakes. Maybe I’ve just not found the place yet!?

Falafel stalls/outlets – I know you can get falafel in Dublin (Farmers markets in Dun Laoghaire is my favourite place) but I would love to see places throughout town which sell wonderful fresh falafel stuffed with fresh salad and handed to you in a piece of paper to take and run like they do in Amsterdam or Berlin.