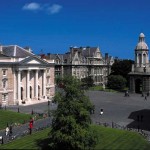 I’m probably going to be lynched by the world’s politest mob for this.

I met up with a staff member from Trinity College Dublin’s staff last week for lunch. We hadn’t made any plan in advance, so I thought I’d see what lunch was like in TCD’s canteen, The Buttery.

It’s in a cavernous, wood-panelled, old hall. An impressive and grand space with big long tables. Full of pictures of austere old deans or college presidents staring down with their cold, dead eyes. I fully expected a gang of young wizards to hop onto their broomsticks and fly off to class.

That magic didn’t materialise. As soon as I sat down to my meal, I thought: what’s the point of this place anymore? For €9.85, I got paella, without a wedge of lemon. I’ll grant that paella can be tricky and often doesn’t work out. This was ok-ish, maybe. But I kept biting into something quite gritty, and all it really tasted of was a somewhat sour fishiness.

I was asked what sides I’d like with that, so I assumed they were part of the €9.85. My best options were cubed turnip and peas and sweetcorn. In hindsight, “just the paella” might have been wiser. The lunch companion had some meatballs with two sides. It looked fine; the type of food you’d expect from a college canteen.

The cashier didn’t really seem sure of the price breakdown when I subjected her to the type of grilling that makes people not want to eat out with me.

Trinity students have the best campus in Ireland slap bang in the middle of town. Just two minutes away from The Buttery, there’ s a huge choice of cafes and restaurants in town offering much cheaper, much nicer food. On the way out, I noticed the menu of Trinity’s fancier restaurant, The 1592. Mains were around the €25 mark, and the “Supreme of Chicken”, “farce”, and such makey-up words as vermoulade and tian – you know the standard nonsense – got my back up from the get-go. Apparantly, it’s where the Trinity Business Alumni meet up with “high-profile” speakers. Bankers and the like. I didn’t look inside.

When I went to UCD, we were stuck with “the restaurant” and Nine One One donut and sandwich bar for the first few years, until they brought in some comically disappointing “competition”: more sandwiches and carvery (When I left, in fairness, they opened Elements restaurant: a good value, quality option). But back then, unless we hopped on a bus or walked 20 minutes to the Olive Tree at the Clonskeagh mosque, we had no choice. Trinity students do. So why was The Buttery so full?