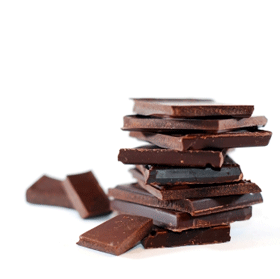 Chocolate has a long, dark history. The Olmec, Mayan and Aztec civilisations of modern-day used cacao beans as currency, while this ancient “drink of the Gods” was originally consumed in liquid form. Chilli pepper and vanilla were commonly added as flavourings.

Enough odes to this intoxicating drug have been written already. Suffice to say, however, that I’d happily live in a chocolate house and accept chocolate as part payment.

As it’s Fairtrade Fortnight, and chocolate is one of the most well-known Fairtrade products, we thought we’d make it our ingredient of the week.

Divine Fairtrade chocolate is just €1.39 in SuperValu – a real bargain.

Check back later today for a elegant but really simple chocolate cake, and we’ll have more sweet things and a savoury dish later in the week.