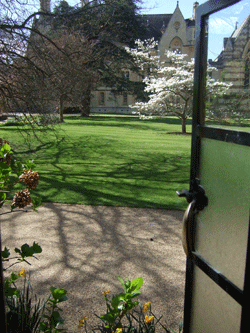 The view from our rooms in Trinity College

I’m back from lovely Oxford, which has to be one of the world’s most beautiful cities.  As well as lots of wandering around going ‘ooh’ at the buildings, there was a good bit of eating out, which went very well indeed. 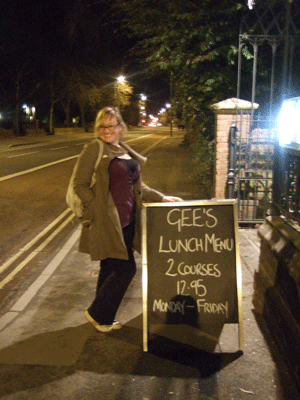 The other main notable things about going out in Oxford is that lots of restaurants were offering really good deals, and that the booze is really cheap.  Oxford is a town that is largely populated by extremely posh people, and is not generally a cheap place to live: the cost of living is reportedly comparable to London’s.  But the bars and restaurants are still offering much better value than in Ireland. Two Bombay Sapphire gin and tonics cost me £5.80 in Oxford (and not in a student bar); I was charged €8.50 for a single rum and coke in Tripod in Dublin last weekend.

Lots of restaurants were offering deals, such as two courses for £12, or three for £15, and these were not just chain restaurants but some very nice-looking independent bistros and restaurants.  It’s depressing really, even considerably swanky parts of the UK are still much cheaper than Ireland. Sigh. Anyway, I’d really recommend Oxford as a destination for a weekend break: it’s beautiful, easy to get to (an hour and a half on the bus from Heathrow), easy to get around and (of course) cheaper than Ireland!