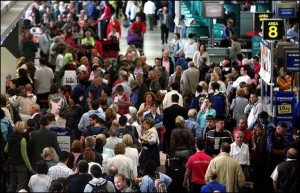 If you’re lucky, you might have booked a flight out of Ireland for an Easter break.

Occasional visitors to Dublin airport will be familiar with the bad value on offer at its restaurants. Every time I go, I swear I’ll never eat there again but then I get hungry and find the big flashy signs in the food hall more alluring than the prospect of an overpriced Aer Lingus or Ryanair sandwich.

I’ve tried a few of these places now. By far the most horrific was The Eating Place. Their spit-roast chicken was advertised as coming in a choice of three marinades, but the server somewhat obnoxiously laughed at me when I asked for the lemon and herb chicken. Of course they didn’t have three varieties: only plain rotisserie chicken. Silly me, believing a menu.

After a wait of ten minutes, I’m honestly not exaggerating when I say that what arrived was the most offensive thing I have ever been served. Weak, watery, slimy, mostly flavourless but slightly nasty chicken, served with cold and burnt chips and redeemed only by a corn on the cob for the astronomical price of €12.99.  This place’s management seem to have no respect for their customers. How about some pride in their food? Or even some shame?

This place charged a ridiculous price for smoothies, €13.45 for a carvery, and €8.60 or €11.60 for an Irish breakfast, depending on how much you eat. Their half-roast chicken cost €11.45 and their tiny plate of salad was an astronomical  €4.95. Their food seems better than The Eating Place and I’ve heard slightly better reports but I just couldn’t bring myself to pay these exorbitant prices.

The most reliable places at the airport are actually the chains: McDonalds (at least you know what to expect), O’Brien’s (consistently mediocre sandwiches), and Starbucks. At Starbuck’s,  the Chicken Club costs €4.85 and the Falafel and Houmous Flat Bread costs €5.10.

I actually ended up, hungry, in desperation and unwilling to pay so much money for such generally crappy food, heading downstairs to The Upper Crust, where I had a really deliciously fresh ham and cheddar demi-baguette for the crazily inflated price of €5.5o. Still, I enjoyed every bite and had to persuaded by a more sensible head not to buy another: about another €1.50 cheaper and I’d have been happy.

I wonder who is ripping us off at Dublin airport. Is it the DAA, charging ridiculously high rents, or are the outlets themselves profiteering? I suspect it’s probably the former. It’d be nice to see some genuine competition at the airport . Perhaps if we all refuse to be fleeced anymore and vote with our feet either the DAA will have to reduce rents or the outlets get real and lower prices.

Of course, it’s not always possible or convenient – especially if you’re catching an early-morning flight – but you’re better off eating before the airport or bringing your own packed lunch. Or if you’re heading through Drumcondra on the way to the airport, leave your house a little early and have a delicious meal at The Cheese Pantry, which I gave a rave review to here last week.