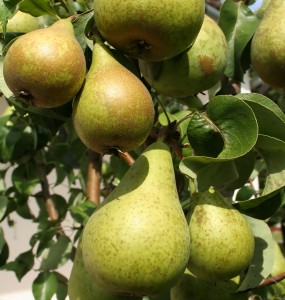 The other day, my nice neighbour Barbara offered me some dessert, and I thought I was about to get some cake. She plonked down a pickled pear, pointed, and gently said, “Would you believe that dessert was made in 1985? I’ve had that pear for 17 years”. I smiled, as little bugs of horror darted around inside my face, and I contemplated if she was trying to kill me.

Then I ate it. And it was perfect. Swimming in sweet, tangy syrup, it was like a lucid childhood dream. I vividly remembered being five and visiting mycool, young, elegant, globe-trotting aunt in London, where she served up a different, simple and then wildly exotic dessert that made her guests say words like “ooh”.

Barbara told me that she came across the recipe back in 1985. All those years ago, she’d stood in the back garden, saying goodbye to her old family home with its beautiful orchards and plants. But before she left, she harvested an abundance of juicy pears from the trees.

Sounds lovely – only now she had 17lbs of pears to use up. Then she found a recipe in an obscure old magazine. It has three ingredients so it’s really cheap: possibly the cheapest dessert we’ve featured here. The pears don’t need to be ripe, the ingredients are easy to find, it’s laughably easy to make, and everybody will say “ooh” and “aah”. Best stored in a Kilner jar or airtight container in a dark, dry place – your storecupboard, ideally – it can last for years, so you’ll always have a dessert at hand. There’s no waste – you can eat the core and pips too.