Back in February, we mentioned that the Independent’s food critic Aingeala Flannery had slated Odessa’s fiver plates. This caused some minor outrage among our readers, a number of whom commented to say that they really liked the Odessa fiver plates, and that Aingeala Flannery was Not To Be Trusted.  I finally, finally got around to trying them out myself last Thursday, when a friend and I went there for a pre-cinema dinner. 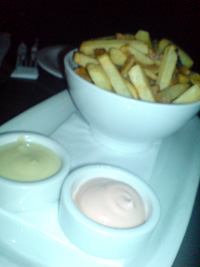 The fiver plates are pretty much tapas size, and we found that two each plus one to share was plenty of food for the two of us.  We both had the  Chorizo, Red Wine and Chickpea Stew, which was very tasty and heavy on the chorizo (which may have explained the extreme oiliness of the stew, the one thing that was wrong with it).  Clairey had a really delicious Lentil and Spinach Dahl, and I had some Chips and Dips, which were fine.  We also shared a portion of good Garlic Fried Prawns, and a bottle of house Sauvignon Blanc for €19.50.  The total bill came to around €45.

While I was happy with the food and service – and it’s such a lovely cosy space downstairs in Odessa – I’m still not convinced that this is fantastic value. It’s fine, no complaints, but €45 seems to me like a standard price for the food and wine that we got rather than a particularly brilliant deal.