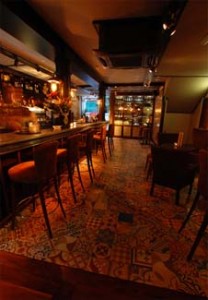 He Who Does Not Wish To Be Named and I had some time to kill before going to the cinema in Cork city, so we wandered around looking for some early birds.  We settled on The Cornstore on Cornmarket Street.

We didn’t get the early bird, but went instead for a one hour special served between 5 and 6 Monday to Saturday and 12-3 in the afternoon too.  This deal was €15 for two courses and the selection was pretty decent.  There was a choice of Caesar Salad, Soup of the Day, and Thai Chicken Satay Skewers for starters.  The choice of mains were a Salmon dish, Bangers and Mash, Burger and Chips or Penne Pasta with Goats Cheese and Pine nuts as the vegetarian option.  And for dessert there was Pavlova or Chocolate Brownie.

He Who Does Not Wish To Be Named went with the Burger and Chips and I had the Bangers and Mash.  It was LOVELY!  The mash was really creamy and the sumptuous, saucy and succulent sausages were served with peas, gravy, onions.  I was a fan.  He seemed to enjoy the burger too. I guess it was a fancy burger and the chips looked home made. It disappeared quickly enough.

Overall the mains were delicious and we got our just desserts (I know, I’m hilarious!  Also, I go out with someone who breathes puns…they’re infectious).  Seriously though, the desserts were gorgeous.  He had the chocolate brownie which was served with vanilla ice cream and hot toffee sauce.  It was beautiful, too heavy for me though, and too big, but I guess that’s a good complaint.  I had the pavlova.  It’s hard to go wrong with pavlova, and they didn’t.  Meringue, cream, fresh strawberries, raspberries and blackberries (correction, blackberry..singular…I did feel a little jipped).

Overall I was pleased though.  I’d been to the Cornstore before at night and I found it quite loud and difficult to hold a conversation, but during the 5 o’clock to 6 o’clock period it was quiet and pleasant.  Then again, I’m not a fan of people at the best of times so that suits me perfectly.  I think I’d go back.