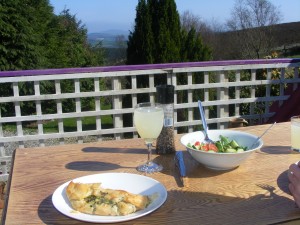 Picnics: cheap as chips and easy to assemble. I’m 28 now, but when I was a kid, a clear sky on a summer’s morning meant one thing. Picnic on Silver Strand. My folks would make some rashers, sausages, and coleslaw, squeeze some orange juice, and grab a few baps, packets of Tayto, and my two (then) stupid pointless older sisters. Pack it all in a coolbox and head to the beach in Wicklow. Then we’d slather the baps full of ketchup and sand, cut our feet on the splintered steps, and freeze to death in the sea.

But picnics seemed to fade away, and the boom years  were full of barbeques. As smokin’ as they are, you can’t beat packing up some food, going for a walk, and stopping to eat it by a river, at the sea, in the forest, on the mountain…

You can go to a lot of trouble or none at all, they’re generally much cheaper to prepare than a barbeque, and they’re the best way of capturing a bit of the summer. Bring back the picnic. Here’s some Greek love. 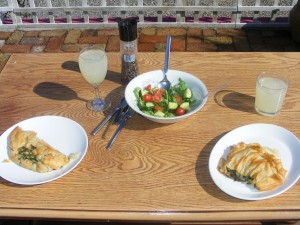 Because I’m as awkward and messy as a baby’s drawing of a dodo, I was pretty sure that the Jus-Rol filo pastry, precious and delicate, would fall to shards when I touched it. But even though it did break up a little, and I failed to fold the mixture into perfect filo triangles, they worked out beautifully. Follow the instructions on the side of the packet, defeeze the pastry in a fridge, handle delicately, and only open the packet until you’re ready to fill the pastry as it gets brittle and dry when it’s exposed to air. Make sure your work surface is dry by dusting it with flour.

This isn’t a quick and easy recipe to make – it will probably take about 40-50 minutes to prepare – but it’s well worth the time.

Also in the picnic basket, a really simple salad of 3 chopped tomatoes (75c), a cucumber (around 70c if I recall correctly) chopped into cubes, and some fresh rocket (from the garden). Drizzled with some olive oil, a dash of balsamic vinegar, salt and pepper. And M&S delicious Still Lemonade – €2.99 per 1litre carton or €4.50 for 2 cartons.