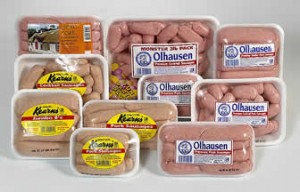 We talked yesterday about guilty food pleasures, although I prefer to think of them as nostalgic comfort food, as there’s already far too much silly guilt associated with food.  I was struck while reading the comments with a sudden desire for a sausage sandwich on brown bread, with wholegrain mustard and mayonnaise.

My usual favourites for this cheap and tasty snack are Kearns’ Sausages, which I can pick up in my local Centra at about €1.60 for a pack of eight.  Yesterday  I nipped into Dunnes Stores instead, who don’t stock Kearns’, and came away with a packet of Shaw’s Sausages. I thought these would be the next best option, as I find Denny’s sausages strangely unpleasant (I think it’s the texture of the skin).

It’s probably a strange thing to be fussy about, but they were sadly disappointing in my otherwise perfectly crafted sandwich.  They’re not particularly interesting in flavour, and had lots of those creepy little white buttons that you sometimes get in pork.

Kearns’ Sausages have an excellent peppery flavour, and while they’re not a gourmet product, I think they’re just as tasty as many of those premium sausages.  Granted, they’ve probably got less pure pork and more filler, but when it’s a ‘guilty pleasure’, that kind of thing doesn’t really matter.

What’s your favourite sausage for a sausage sandwich or a fry-up?