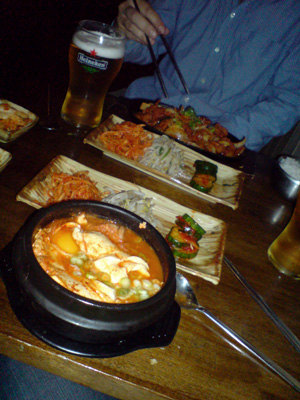 My good friend David and I had a big slap-up feed in the Hop House last week: we felt we richly deserved to pig out after going for a very strenuous 30-second swim in the Forty Foot.  By the time we got back into town we were starving and invigorated from the swim, which is the perfect state of mind for enjoying spicy Japanese and Korean food.

The Hop House is a bar and restaurant on Parnell St that has a very extensive menu of Japanese and Korean dishes.  There’s a wide range of sushi on offer as well as the hot dishes.

We had a starter of good spicy chicken wings (€8.90) and a small helping of tuna maki (€5).  I’ve shamefully forgotten the names of our main courses, but they were both from the Korean section of the menu, and cost around €14.    David’s was stir-fried Korean pork and vegetables, and mine was a soft tofu stew.  The pork was the winner and I kicked myself for ordering the tofu – there was nothing wrong with the way it was prepared, it’s just that I find the slippery texture of soft tofu becomes a bit off-putting in large quantities.  The broth that it came in was spicy and flavoursome.  Both of our mains came with side dishes of kimchi and vegetables.

We also had a pitcher of beer from the adjoining bar (hence the forgetfulness).  I’ll definitely go back to check out the Hop House again, and try some of their Japanese dishes.  Overall the value is good: not as cheap as some of the other Asian places in the same neighbourhood (such as the excellent Alilang just a little further down Parnell St) but cheaper than the older Japanese restaurants such as Yamamori.  Our food came to around €40 for two mains and two starters.   The interior is attractive and the service is really good: I would recommend trying it out.