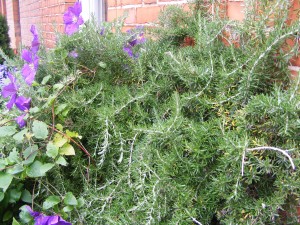 We all know that blackberries grow freely throughout Ireland in late summer and early autumn, but some other foods also cost nothing. I got the LUAS to Kilmacud Road last week and walked up towards the Beacon Hotel in Sandyford Industrial Estate. It was impossible not to notice: the side of the public footpath was covered with massive, fresh and fragrant rosemary bushes. I don’t think rosemary grows wild in Ireland, so it’s possible that the council or somebody else planted them.

If you live along here, you should definitely grab a handful (by the way, rosemary seems to grow as easily as mint, so it would make a good start for your herb garden).

According to my friend Philip, a by-law or loophole allows any of us to grow food on public land (or graze cattle and sheep, apparently). He’s about to start a vegetable patch just outside his house. With allotment space hard to come by, I reckon it’s a great idea. Some of his friends have suggested that random passers-by will nick his produce, but I’d be surprised to see people surreptitiously rob a carrot from the ground.

It’s got me thinking. If rosemary can grow freely along the side of the path, it’d be great to see community groups, or even a few organised individuals, identify some public land and start growing on it. The crops – carrots, garlic, potatoes, whatever – could be tended by a rota of volunteers, and the produce could be sold or perhaps shared on co-operative lines. Or, in the case of a long, thin strip of land such as that by the Kilmacud LUAS, herbs such as mint, rosemary, and parsley could take the space of a bunch of fruitless weeds. People could pick them as they wish, and I have enough faith left in humanity to believe that herbs are unlikely to be vandalised, or plucked bare by mad people.

Just an idea. I’m not going to do it but it’d be great to see some enterprising soul get the ball rolling. What do you think? And do you know any good spots around Ireland for other natural freebies, herb, fruit or otherwise.