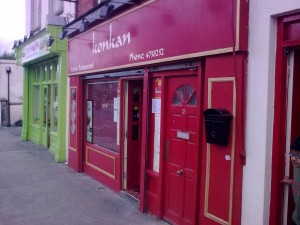 Since I moved to Dublin, I’ve been frantically darting around like a distracted child in an impossibly large sweet shop, looking for cheap eats.

Just around the corner from where we live is KonKan, an Indian restaurant I had heard much ado over. Quality, cheap, and nearby: it sounded just right. So, a gang of 19 decided to head there for Snack Box’s recent 30th birthday celebrations.

Many of us opted for the early bird menu, where two courses (plus rice or naan) cost just €15.50. As with everywhere, the choice on the early bird menu isn’t huge: Lamb or Chicken Madras, Roganjosh, Korma, or several very decent vegetarian options including Chickpea Channa Masala and Vegetable Jalfrezi.

What we got was excellent: high praise was sung for the starters of Vegetable Pakoras, Chicken Malai Tikka (an Indian food-loving friend said it was some of the most well prepared chicken he had even eaten), and the Lamb Seekh Kebab.  I really enjoyed the Chicken Madras, while Snack Box’s Chicken Chettinad, simmered in a mild coconut sauce, was a delicate mix of well-balanced flavours. Howver, as with every Indian restaurant I’ve ever been in, there was a small amount of meat and a lot of sauce. Why is this?

The service was really impeccable; the maitre’d was very accommodating to whatever we wanted. They even organised an old-style sponge cake for Snack Box so we could all do the obligatory song.

Everybody left happy, although some of the more experienced Indian nuts felt that the chefs had more to give but were restraining their clear talents to “appeal to the blander palates of most Irish people.” The bill, for 19 people with over 20 beers and three bottles of good wine, came to €498.65 before tip. A very affordable, great value night out.

A few days later – still avoiding the kitchen – we went back again for the excellent value early bird. Cheap as this was, eating out has to stop, or I’ll be bankrupt very soon.