This week, we’re joined by Diarmuid MacShane of Value Ireland, one of the best websites for Irish consumers, for our occasional Bloggers Recommend series. Diarmuid’s also a regular voice on consumer affairs in the news, on TV, and on the radio.

Having left Ireland in the late 1990’s straight from college, my first experiences of eating out (when paying for myself) started in mid-town Manhattan and developed further in Central London. Because of that, I suppose my expectations of what I’m looking for here in Ireland (and Dublin particularly where I’m based now for the past 5 years) are strongly dictated by those experiences. 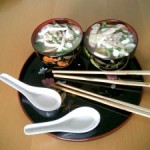 I’m going to start with what I miss. And I believe Jean mentioned before here on CheapEats.ie that there’s nothing more that she’d like to find in Dublin than a good, value for money, Japanese restaurant and take-away. I’ve been keeping up with the Japanese updates on CheapEats.ie and when I get longer than 20 mins for lunch in the coming weeks, I’ll be following up on some of the recommendations!

I don’t remember the name of the place, but I remember that the first experience of Japanese food that Irish people could sample was a restaurant that was based in Blackrock (and I think had an outlet in the city centre somewhere as well). That, I remember, that was what would now be called a “fine dining” experience.

Yamamori, which I used to frequent quite regularly, has sort of taken on that mantle. I’ve visited Yo Sushi a couple of times since it’s opened – watch out for their specials in the late afternoon where you can get some value. Sushi King has opened close to where I work recently as well, and I’ve had my lunch there a few times as well. However, there’s something missing. For me, the Japanese food experience is to pick 5 or 6 different small dishes – yakitori, gouza, sushi and so on, and mix and match for a fantastic eating experience. But as we’re seeing across the outlets in Dublin, when you’re charged €7-9 per dish, you’re not going to get out cheaply for what shouldn’t be such an expensive meal.

My own personal preference for sandwiches during the working day is Sandwich Symphony on Dawson Street. My normal order is one of their paninis which are consistently good. Their coffee isn’t too bad either.

I’ve written on ValueIreland.com a fair bit about the sandwich special offers from many of the chains in the Dublin 2 area, but I’ve become bored with most of them. Where I used to love the three cheese and ham toastie in Costa Coffee, the quality of service in the place leaves a lot to desire so I’ve started avoiding the place.

I don’t think I’ve written about this before, but I’m a big fan of the lunch offer from Rolys Bistro in Ballsbridge. We mainly go at the weekends, whether it be a Sunday lunch with the folks, or an early lunch with copious amounts of wine prior to a match in the RDS, Rolys has always been top class, providing excellent value for money.

I’m also a fan of Harry’s Bistro on Dawson Street. For the weekday lunch, they’re consistently good – nice food and friendly and efficient service. The fish cakes and the fish are a favourite for me.

I strayed away from Dublin 2 for lunch recently and ended up in Blackrock (yes, it was a long long lunch). We went to Tonic on the Main Street and the place was fantastic. The staff were very friendly, efficient and helpful. The food – we both had the chicken wings – was just fantastic. “Proper” chicken wings.

From the looks at the rest of the menu, and the specials board, this looks like a great place for lunch, providing great value.

Quick and not so nasty

It’s been a while since I’ve enjoyed it, but the Golden Mountain takeaway in Beaumont has the best Thai green curry I’ve had this side of Hong Kong (long story, but I’ve never been to Thailand). A more recent discovery on the lazy takeout/delivery front is Little Caesars Pizza (not to be confused with the city centre restaurant). They have an outlet in Ballymun that delivers, but there’s a few more around the city. The Detroit Pizza, or the Spicy Spicy are worth checking, and definitely get their cheesy garlic bread – almost enough in itself.

I’m pretty much a “point to point” driver – not wanting to take any time by stopping half way, but recently on a Wexford to Donegal trip, we stopped in Yeats Tavern in Drumcliff in Sligo for food. The place has changed (expanded) greatly since the last time I was there, but the crowds that were there just show how good the place is.

The food is good – nothing spectacular, but just right to meet the needs of the hungry traveller, the staff are relatively friendly, and everything is handled nice and speedily for the travelling public.

During 2009, the best food experience we’ve had so far was in the Castle Murray in St. Johns Point near Dunkineely on the south west coast of Co. Donegal. If you get a nice evening, the sunsets visible from the restaurant are spectacular. To best enjoy the food, I can recommend the prawns and monkfish starter followed by the sirloin steak. The fish specialities on the main course menu are pretty spectacular as well. Castle Murray is definitely fine dining at its finest – if you’re up that direction at all, check it out.