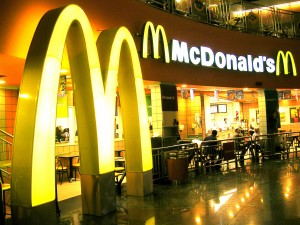 I remember when I was in Egypt a few years ago, I was gob-smacked when I saw a McDonald’s in spitting distance of the Pyramids. So when I read on BBC online that the fast food chain will be hawking their burgers bang in the middle of the Louvre; I certainly raised an eyebrow.

What was more shocking was the lack of reaction by the French to the new ‘McDo’. Museum staff are reportedly discontented with the decision but I would have expected une mass outragé at the thought of Ronald McDonald sharing quarters with the Mona Lisa. After all, this is the Mecca of high art and the world’s most visited museum; at least some fainting or something.

Then I discovered that France has become McDonald’s biggest market in the world outside of the US with the opening of 30 new outlets last year in the country.

Why is McDonald’s so popular in the land of haute cuisine and what do you think of this latest move by the chain?