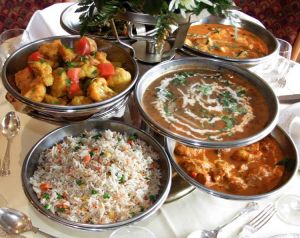 Jimmy and I saw an early bird special in an Indian restaurant in Cork so we decided to give it a try over the weekend.  The restaurant is called Eastern Tandoori and it’s in the city centre, on Emmet Place.  The early bird is from 5 – 7 Monday to Thursday, 5 – 6 Friday and Saturday and 5 – 6:30 on Sunday.  The offer was a 3 course meal for €15.95 which seemed pretty good.  As it happens the third course was tea or coffee… I always feel a little cheated by that but still, two food courses for €16 isn’t bad.

The menu had a choice of onion bhajee and chicken shashlik kebab for starters, and the mains choices were Chicken Korma, Lamb Gosht, Prawn Masalla, or a chickpea dish. Jimmy started with chicken kebabs while I got the onion bhajees.  Both were delicious and they were served with naan bread so by themselves were quite filling.  Oddly, the bhajees were flat as a pancake.. I always thought they were more 3 dimensional. Maybe I dreamed that up. Anyway they were really tasty and just the right level of spicy for me (i.e. not very).
Also both really enjoyed the mains.  I love a good chicken korma but they tend to vary so much from restaurant to restaurant that you never really know what to expect.  This one was perfect:  creamy and full of flavour, and once again not too spicy. It was gorgeous.  Jimmy enjoyed the lamb as well, he went for the spicier option but I think he would have been happier if his mouth was a little more on fire.  Having said that he finished it and looked pretty satisfied!

One thing I have to say for this place though is that it has a lovely atmosphere.  We were there early in the day so it was still bright outside and they put us in a window seat.  Because of it’s location Eastern Tandoori has a great view of the river so you can see across to Shandon; it was really pleasant during the day but I’d imagine at night it’s very romantic.  Plus they have all the accoutrements of Indian cuisine that make it seem so different… the fancy little bowls for the dips for your poppadoms, and the little dish heater in the middle of the table with the tealights inside.  Even the tea came with a cute little jug for the milk and matching bowl for the sugar – completely impractical for day-to-day use but another of the little touches.  I love that sort of thing!

Overall I really enjoyed the meal.  I always think it’s cheeky to call ‘tea or coffee’ a “course” but Eastern Tandoori certainly isn’t the only place to do that.  And I wasn’t impressed by the main being halved and getting the other unknown dish as a side instead.  But, the atmosphere was lovely.  We were in there for almost two hours and never felt rushed (granted the place was really quiet) nor did the waiters hover over us so it was very calm and relaxing.  I would definitely go there again.