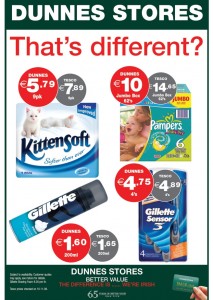 Over the past few weeks, Tesco have been publicising their new “Spot the Difference” campaign, with a website showing quite substantial price differences, on around 200 products, between them and Dunnes, SuperValu, and Superquinn.

This week, Dunnes responded by highlighting a whopping four items – wow, four! – where they’re cheaper. Two of the four items a whole five and fourteen cents cheaper. Dunnes are also highlighting price cuts on various items, but this isn’t particularly attractive in itself: aren’t all the big supermarkets cutting prices?

I don’t beat a drum for Tesco, but Dunnes’ response brings to mind a child who, having just comprehensively lost an argument, pulls the winner’s pigtails and runs away feeling victorious.

What are Dunnes thinking, highlighting four cheaper items against Tesco’s 200 odd? Dunnes have a notoriously rubbish marketing department, so it’s possible, I suppose, that their prices do compare favourably with Tesco’s. But on these figures, Tesco appears to be substantially cheaper. Well done Dunnes, you make a great case for your chief competitor.

If you are shopping in Dunnes, some of their current special offers include:

Offer expiry dates vary. Click here to see them all.

What’s your experience of Tesco vs. Dunnes?