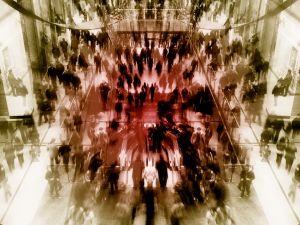 We’re joined today by Irish Times journalist Louise Holden for a special guest post on the politics of shopping.

Grocery shopping has become complex to the point of absurdity. There has been a steady convolution of the simple act of shopping over the last twenty years, but recession brings a new and bewildering twist. How does the politically-sensitive and nutritionally-literate shopper get by on a budget?

Consider fruit. An apple a day has to come from somewhere but more often than not it comes from Israel or Chile which clocks up way more air miles than antioxidants. You could opt for the Irish variety, but what’s this? Wicklow Pink Ladies are double-wrapped in cellophane and
a foam tray and will gleam in a landfill until long after the benefits
of the apple have worn off and I am composting nicely in a graveyard
somewhere.

Perhaps I should go to the farmer’s market in the posh neighbourhood
two postcodes away from mine and buy spotty Irish apples in a paper
bag.  However, that would involve a drive that would probably burn
more energy than it takes to create and destroy the foam tray. Sigh.
These have been issues for over-analytical shoppers for some time but
now that price sensitivity has come into the mix, it’s meltdown in the
aisles. All the above considerations are swept aside by the lure of
three trays of fruit for the price of two. Who gives a damn where they
came from? It’s where they’re going that matters. 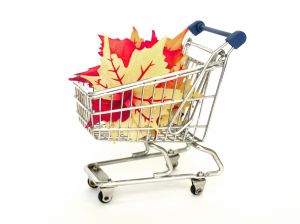 My dinner plate became politicised around 1999 when I started paying
attention to things. I’ve stopped buying red meat since I learned that
it takes about 15 fields of wheat to fatten up a single cow and while
I’m eating my burger a whole village in India is going without the
water it took to irrigate the 15 fields to grow the wheat to feed the
cow I’m eating. But a pound of mince for 4 quid in Superquinn? That’s
very hard to resist. After all, if it wasn’t for meat protein we
wouldn’t be the political animals we are today.

Chickens, it goes without saying, are trouble. It’s €13 for a free
range chicken and I have worthily parted with that sum each week for
as long as I can remember. Now that I’m broke, along with the rest of
the country, I’m finding it extremely hard to resist the €6 meal
deal that includes a Death Row chicken plus some non-organic Peruvian
carrots and a packet of processed, heavily salted ready to roast
potatoes from Shropshire.  No politics, no patriotism, just
tantalisingly cheap food.

I feel sad eating the chicken that lived the unexplored life.
Poisoned, even. I feel worse about this than I felt when I nicked that
button badge of Ben Volpellier Perriot off the front of Smash Hits in
1986.  I used to be a good person but my morals have slipped since I
lost the gloss and indignance of youth.

Each week, it seems,  a new shopping sin is added to the Consumer
Commandment Index and I’m losing track. Thou shall not buy overfished
cod. Thou shalt buy dolphin-friendly tuna. Thou shalt seek out
fair-trade and Irish-made even thou you’ll never get both in the one
product.  Thou shalt avoid packaging. Thou shalt not buy palm oil
because of the sad gorillas. Thou shalt not covet trans-fats or MSG.
Thou shalt covet plant ethyl stanoids and L.Casei Immunitas and other
impenetrable jargon.

Then there’s the ruling on organic food. If I don’t feed it to my
children I’m condemning them to a short life of toxic overload. If I
do, I’ll never have the money to send them to college and they’ll
slide into a lower socio-economic group than their parents and have a
statistical propensity for a shorter lifespan anyway.

By the end of the venture I’m so wracked with guilt and moral
confusion that I waltz through the self-service till without paying
for the organic condoms and the fair-trade shamrock pesto under the
pile of sustainably-farmed cotton shopping bags in my trolley. But
that’s not a sin anymore, is it? My wallet can’t afford to buy them:
my conscience can’t afford not to.