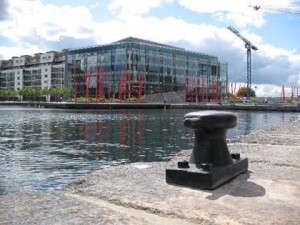 Breakfast by the Grand Canal

Just had a very agreeable brekkie in Herbstreet on Grand Canal Square (it’s on Hanover Quay, I think). A bap with bacon, a good quality sausage, egg and nice relish plus a tea or coffee for €5. Really good coffee.  The offer seems to run until 11.30 or therabouts. Definitely recommend it.

This is the only opportunity that I’ve found to make a few people aware of a fantastic feast that a friend and I enjoyed mid August. I don’t know if it was a one off or if it is available throughout the year. We were travelling to Derry when hunger struck. Passing through Ballybofey and Stranorlar we didn’t notice anywhere with parking and lunch as opposed to a fry up. However we stopped further along at An Grianán. All looked so magnificent we thought it would cost a lot. Wrong. We had a huge buffet choice which included salmon cooked in 5-6 different ways including smoked and a whole salmon where we could cut off as much as we wanted. There were other offerings plus salad, potatoes, bread etc. Everything was so freshly prepared. We had juice and coffee and didn’t bother with wine. It cost €7 each which is the best value I’ve ever had in Ireland. I have told a number of friends about it. Perhaps the people of North Donegal want to keep it a secret because I’ve not seen any publicity.