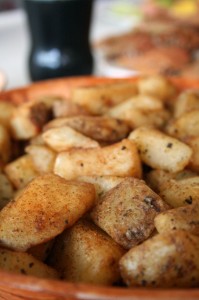 The Guardian Food and Mouth Blog has the most rigorous article on roast potatoes that I’ve seen anywhere: they try four different recipes with three different varieties of potatoes, resulting in twelve different types of roast potato.  You really have to respect that level of commitment to spuds.

They try recipes by Delia Smith, Nigella Lawson, Hugh Fearnley-Whittingstall and Heston Blumenthal; with the potato varities Desiree, King Edward and Maris Piper.  The Daily Spud also had a great post recently on the various things you can try when preparing your roasties, while our own Rercy recommended the Heston Blumenthal method.

I’ve always found that the goose fat and semolina method used on Rooster potatoes is pretty great, and that’s what I’ll be doing this Christmas.  I may give the boiling with the peels thing a try, as it apparently enhances the potatoey flavour.  Mmmmm potatoes.

How will you do your roasties this Christmas?