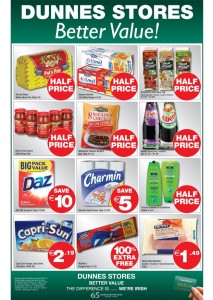 Special offers this week at Dunnes include:

A prize for anyone who can read the small print: the offers are valid until possibly January 9 or 19. It’s none of your business, apparantly.

On the subject of Dunnes, an interesting case went under the radar over Christmas. Tesco brought Dunnes to court in an attempt to stop their largest rival from advertising price comparisons. On December 23, The Irish Times reported (now, don’t choke on your cornflakes):

Tesco claimed Dunnes promotional advertisements made direct and unexplained comparisons with Tesco’s standard prices and misled customers by failing to compare like with like. Dunnes argued that its advertising campaign, in which it highlighted its lower prices, was incapable of misleading consumers.

Read the full story here. The judge threw the case out, but it makes you wonder if you can really trust the special offer promotions in supermarkets, as we’ve pointed out in previous posts on Tesco and Dunnes. Neither Tesco nor Dunnes emerge from this casewith an enhanced reputation.