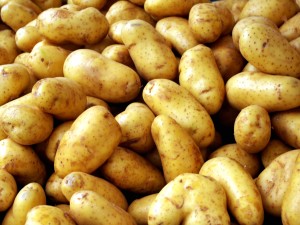 All Christmas I couldn’t stop thinking about food out of greed and now I can’t stop thinking about it out of fear. I live on the top of a mountain in West Wicklow and I’m snowed in – alone. I did make provisions last week and got copious amounts of food including an auxiliary ham but stocks seem to be dwindling.

Over Christmas, we lost power for five days and were reduced to baking spuds in our wood burner and reheating stew on the top which was fairly romantic by candle light. Day two was less congenial – warm spaghetti hoops out of the can. We tried to fancy them up by adding chorizo and tabasco sauce but there’s no getting away from those horrible hoops.

Well those heady days of sharing such misery are gone and although I do have power and the luxury of running water, my food situation is starting to get drastic and I’m having to stretch what I have.

What I have rediscovered is the mighty potato and how generous this little fellow is. I have been having the humble spud for breakfast, lunch and dinner. Spanish omelette in the morning – very tasty with some chorizo added, potato soup for lunch using Jeans delicious Potato and broccoli recipe and for dinner I used up the last of my auxiliary ham and made a Ham, Leek and Potato pie by Jane Hornby of the Good Food Magazine. This recipe serves 4-6.

Do you have any interesting spud ideas?