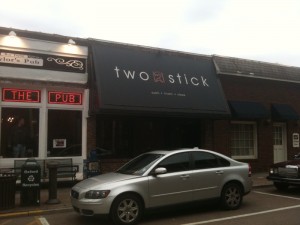 SnackBox is in Mississippi  with his band Hoarsebox recording an album – check out their distinctly  un-southern tunes here. This Monday, he tries out traditional southern… sushi.

In between several ‘chicken on a stick’ based meals each day, I found the time to go to a sushi bar called Two Stick in Oxford Town.

Now I know sushi has been a contentious issue on CheapEats before. But I’m all the way over in the USA so you can’t hurt me, I’m too far away. So I’ll say what I like. 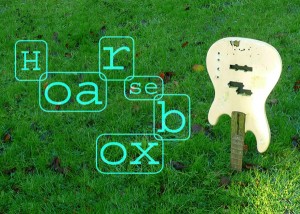 American portions are, in the words of Darina Allen, ‘simply ridiculous’.  There were four of us, all with eyes bigger than our heads and stomachs combined and we over ordered. I’ve never been beaten by a bowl of Edamame but it happened here. Jesus, it was huge. Couple this with a large bowl of tempura vegetables for five dollars and we were stuffed before our sushi even came.

For mains we had a selection of shrimp tempura norimaki and eel rolls coupled with a plate of Polynesian chicken. The sushi was fresh and light, really tasty, and cheap – $6 a roll. But the Polynesian chicken was a load of blah covered in weird pink sauce. Think cheap sweet and sour chicken from Krypton. For the $10 it cost me I could have gotten four ‘chickens on a stick.’

My friend also had a hot thai soup with shrimp which burnt the bejaysus out of him. But that’s the way he likes it. So he was happy and it only cost $6.

The whole bill came to $70 because we were drinking…a lot. Hi Mum!