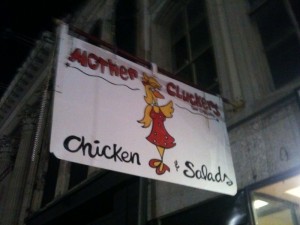 This Monday, SnackBox takes time out from recording an album with his band Hoarsebox to take us on a comprehensive culinary tour of New Orleans.

So there I was in foodie paradise, New Orleans, with six people who all share the same love/hate relationship with food as I do. I want it all the time. I love it in all its forms. But I’ll eat till I’m sad about who I am.

And New Orleans is a place where good eating can really happen.

Our dining experiences were already planned before we had left. One restaurant we were booked into, called STANLEY, had a dinner jacket requirement for men. This was old world tradition and we rose to the occasion. The day before we set off, we went to the Salvation Army and bought some of the oddest suit jackets and waistcoats we could find.

The first restaurant we went to, however, was the very atmospheric Jacques-Imos in a trendy suburb off Oak Street. Think Ranelagh but instead of Glenn Hansard on every corner busking and the smell of Chippers and Asian food, you have brass quartets and crayfish filling your headspace. These dudes specialise in ‘real nawlin’ food.’ Being our first meal the menu itself got us all excited with dishes named things like Blackened Tuna with Oyster Champagne Brie Sauce, Roasted Acorn Squash with mixed Seafood in a Curry Coconut Cream Sauce and Swordfish with Jack’s Voodoo Mojo Sauce. This was very much authentic food, mainly seafood, but it was extremely heavy in terms of sauce and butter etc. I suppose that is the French influence, those cheese eating surrender monkeys. I had Blackened Redfish with a crab shili hollandaise ($18.50) with a side of fries and greens. Grilled Mahi Mahi with Pistacio Sauce, Asparagus, and Shrimp and Smothered Rabbit with Roasted Pepper Grits and Hollandaise, were also ordered, all as main courses. This was a great meal but I couldn’t get over how heavy it all was.

The following day after a night of Sazerac cocktails – local cocktails made with rye, sugar, Peychaud’s bitters and absinthe – we went to a place called LÜKE. This was kind of upmarket but with a gourmet home-style menu – fancy sandwiches, burgers, buttermilk-fried chicken and waffles etc. Also on the menu were fancier daily specials like blanquette of veal cheeks and wild mushrooms and homemade pasta.

There were 7 of us so quite a few dishes were tried, both good and not so good. I had a pressed sandwich of whole roast “cochon de lait” – pork cooked in milk, which they do a lot in New Orleans – with cherry mustard and fries ($14). It was a wholesome tasty dish but I wish I’d just ordered the cochon and eggs dish which has the pork as is with stewed greens and hollandaise sauce. It seemed wrong to be eating such good meat in a sandwich (it was at this point that I decided it was time to start drinking Sazerac’s again. Nothing makes me more depressed than ordering incorrectly in a good restaurant).

Another interesting order was a $17 BLT which had buster crab in it. This would have been novel but for the fact the crabmeat was still in its claws. So the sandwich looked great when it came out but was kind of impractical a d had to be dismantled. Still it tasted good and the bacon was flavoured like a really earthy scotch whiskey.

The top dish for most of us was a crawfish bisque ($8) ordered as a starter. You just knew that the stock for this soup had been made with time and care. Beautiful texture and subtle flavour.  Overall with drinks this meal came to 177 dollars (240 with tip) – not hugely expensive by Irish standards but still more than other establishments in the city.

Then it was off to drink and, when peckish, search for peanuts found in ashtrays in bars. Well not quite. At one o’clock in the morning we ventured to the beautifully named Mother Cluckers for some late night chicken. Spicy wings, chicken tenders, fries, chicken breasts and lashings of Louisiana hot sauce on everything. You know when you’re that drunk and you’re eating fast food like nobody can see you? It was that kind of meal.

The morning after the night before. New Orleans had won the superbowl and Mardi Gras was already well underway. We were brought to world famous place called Café Du Monde for coffee and beignets (weird donut type things) covered in powdered sugar. The thought of either brought on the threat of death by consumption. But we were on the waiting list for STANLEY, a café restaurant open only for breakfast and lunch. I mentioned this place in the post about Fat Tuesday a couple of weeks back for its charity after Hurricane Katrina.

It is situated in a particularly pretty part of the city on St Ann St, Jackson Square, in the French Quarter and, for all its simplicity, was probably the most enjoyable meal in ‘Nawlins’. For just over a hundred dollars, a veritable schmorgesborg of mimosas, orange juice, Iced Tea, coffee, scrambled eggs, eggs Benedict, poboys, bacon, corn beef, hash potatoes and French fries came to us served by smiling faces in brilliant white uniforms. Chef and owner Scott Boswell also runs the upper end Stella restaurant in the city. Here they have the famous Stanley burger which was worked on for months before the final recipe was decided upon. The meal we had here was the perfect antidote after a night of debauchery. I do declare we ate well in Nawlins’.

Overall, if I were thinking of going on a foodie holiday, New Orleans would be top of the list. With more time and less obligation to go to specific places, much fun could be had exploring the French quarter and beyond in search of gastronomic delights.

All of the above places have good websites (bar Mother Cluckers but I don’t think you need to see that place) and give an idea as to the kinds of restaurants they are beyond my weak interpretations.
Jacques-Imos – www.jacquesimoscafe.com
LÜKE – www.lukeneworleans.com
Mother Cluckers – 132 Carondelet Street
Café Du Monde – www.cafedumonde.com
New Orleans, LA 70130-2502, United States
STANLEY – www.stanleyrestaurant.com