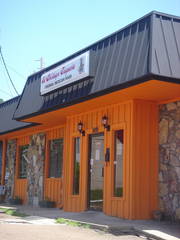 This Monday, SnackBox tests out the deep south’s Mexican treats.

There are quite a few Mexican food options in Dublin. Round these parts we have Acapulco, Cactus Jack, Mexico to Rome, The Alamo and El Paso, to name but a few in the capital.  I’ve only ever eaten in Acapulco and The Alamo and enjoyed both but am always a bit miffed by the price, as Mexican food has to be one of the cheapest cuisines in terms of ingredients used.

In the US, Mexican food is more widespread. It is also unbelievably cheap. In the small town of Oxford, for example, there were at least five Mexican restaurants. We were told by everyone that Taqueria El Milagro was the best. You couldn’t miss it. With a bright orange façade, the only place more colourful in Mississippi is its interior. Greens, blues, reds cover the walls and each table harboured its own individual and beautiful Mexican folklore mural. I’ve always liked the idea of eating a fajita off the chest of a native American Strongman with a load of feathers in his hair, a spear, and a broad in a torn dress by his knee. Finally my chance had come.
Our waitress was about 11 months pregnant which was slightly off putting. You just felt bad asking for anything as she was clearly in some pain.

But she took it in her stride. The food came in huge portions and was really cheap. We had a selection of fajitas, tacos, soft and hard corn tortillas with a mixture of pork, beef, chicken, refried beans, hot sauce, rice, guacamole, oh Jesus I’m starving now. The beef fajitas were the favourite with my associate getting quite irate at the amount we were stealing from his plato. We tried to eat it all because we’re Irish and don’t know where our next meal may be coming from. But we couldn’t finish and now strange male digestion noises were the order of the day with a lot of ‘oohs’, ‘aahs’, ‘jesus’, and ‘bleedin stuffed’ sounds being made at our table.

It doesn’t seem to matter how long I spend in the US. I forget that its perfectly acceptable to take your food home if you cant finish it. It’s one of the few areas where the Yanks beat us in terms of being economical. It’s not that a restaurant in Ireland would refuse if you asked to bring some of your food home but it’s certainly not part of our culture.

Each of our three main courses ranged from $7 to $9  and in total our bill came to $35 dollars. This price, which may seem cheap, makes sense to me. You are dealing with a lot of flour, beans, salad and I imagine, cheap cuts of meat. So it should be cheap.