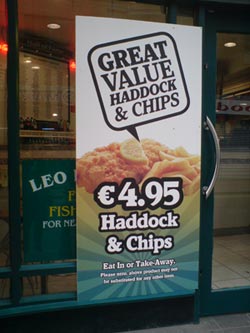 The Burdock’s outlet in the Epicurean Food Hall on Abbey Street is currently running a pretty sweet lunch offer – Haddock and Chips for €4.99.  They were previously running an offer of Buy One, Get One Free on the same haddock meal, and charging around a tenner for it – so the deal is essentially the same, with the added bonus that you can go get it even if you’re feeling antisocial. 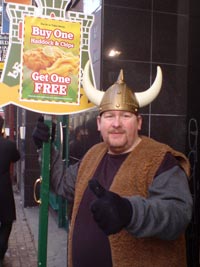 Even though the first deal has now expired, I have to include the picture of the Viking who was advertising it outside the shop, because he was so smiley and friendly, and well, it’s always nice to see a Viking, isn’t it?