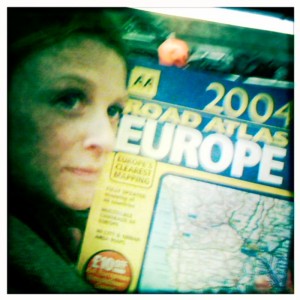 I never thought I'd need a map of Europe to get home!

I was one of the plebs caught up in the travel chaos the other week and marooned abroad because of the plume of ash. An extra week in the sun sounds rather nice doesn’t it? Well it was complete hell and there was no sun in the south of Spain because it was busy shining in Ireland!

Having to make our way overland from the south of Spain to the north of France in just three days was a nightmare. Particularly as there was no public transport – no flights, a train strike in France and any buses and trains available in either country booked out resulted in us spending a fortune on hire cars and taxis.

It was one of the weirdest experiences and even harder for those dealing with kids at such a transport standstill. There were families sleeping on platforms afraid they would miss the only train and when a train did come, people willingly packed themselves in and faced a 10 hour trip with standing room only. I had to break up a fight between two men who between them had about an hours sleep in two days – miserable people everywhere.

I met one man who had desperately made his way, mostly overland, from Florida to Marseille so he could be at the birth of his first child. I’m happy to tell you that he made it and is considering calling the child Ashleigh. I met another women who had to travel up from Agadir in southern Morocco to Belgium with a bad case of food poisoning and a couple of honeymooners who spent their holiday of a lifetime on a train platform in the rain in Spain – pain. Covering 2500 km so quickly at the best of times is challenging but with mass hysteria and a deadline of three days to make the only ferry available it was really stressful.

The money we spent on transport was massive so you can imagine that keeping the budget down on accommodation and food was essential. Along the way we mostly stayed in hovels. One of which, we discovered after paying, was a half-way house and we were kept awake all night by a women shouting at herself.  We were keeping an eye on the food budget too and what really struck me was the big difference between meal prices in Spain and France considering that supermarket prices are as equally cheap in both countries. Why is that?

It was evident that you can get much better value in Spain and for me, Spain definitely won on quality and price. We came across some lovely tapas dishes – here is one with Manchego cheese that you may want to try.

Manchego is a delicious Spanish cheese made from sheep’s milk, I particularly like the smoked variety.