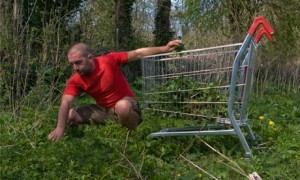 I have friends who very rarely, if ever, pay for their food. Instead, they go foraging through the skips and bins of Dublin city, picking up the mountains of perfectly good discarded food. It’s easy to sneer – ugh, eating from the bin? – but the food is usually well packaged or wrapped up; they don’t eat things covered in bin slime.

It’s astonishing how much food, particularly sandwiches, salads, and cakes, ends up in the bin. Back in 2003, one college mate went along to all to all the anti-war marches giving out “food, not bombs” to a hungry crowd. I wondered how many were aware, as they scoffed it down, that the food had been rescued from the skip.

In today’s Guardian, Mark Boyle writes on how he has lived a moneyless existence for the past 18 months. The most common question he encounters is “How on earth do you eat?” The answer, he points out, is that food is free: it comes from the earth. It can be grown, foraged, bartered for or, like my friends, saved from skips.

The apple tree doesn’t ask if you’ve got enough cash when you go to pick its fruit; it just gives to whoever wants an apple. We are the only species, out of millions on the planet, that is deluded enough to think that it needs money to eat. And what’s worse, I often observe people walking straight past free food on their way to buy it from all over the world via the supermarket.

The article is well worth a look. Click here to read it.

Do you think you could live without paying for food? And would you eat from the bin?