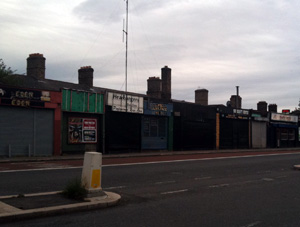 Grim... the view from Diep At Home

There’s a street in Dublin 8 that runs from South Circular Road at Dolphin’s Barn down to the canal, that has to be one of the most desolate stretches of retail I’ve ever seen anywhere. This street has a closed-down hair salon, a closed-down cobblers, a closed-down butchers, a closed-down shop that looks like it once sold scented candles and dreamcatchers, a closed-down cabbies, an open but scary chicken takeaway and a funeral home.  It’s a depressing reminder of how there are plenty of parts of Ireland which were untouched by the boom and are still left forgotten.

Some signs of life appeared recently when a Tesco Express opened, but like most small Tescos, it’s so badly stocked that it’s not much of a draw.  A couple of takeaways then opened, and I did an actual double-take when I saw that one of them was Diep At Home.  As in, a spin-off of Diep Noodles of Ranelagh, a very Ranelagh-type establishment – hip, robustly  priced and frequented by yummy mummies.  And of course, Diep Le Shaker, the ludicrously posh Thai restaurant on Pembroke Lane.  Not at all the kind of brand that you expect to see springing up around these less fancy parts.  I was genuinely surprised, but I assume that Diep would not take such a step at such a time without having a healthy customer base in the area, something that would be easy to establish based on calls to their other branches.  Maybe it will kickstart the street’s business life again, and that would be really great to see.

Now that there’s a swanky takeaway in my hood, I had to try it out.  A friend and I ordered one starter of Tom Kha Gai (€5.50), the chicken soup with coconut and lime that is one of my favourite dishes of all time; the Koh Samui noodles with seafood and Asian greens (€11) and the Phi Phi fried rice with beef (€10).  Everything was good, there were no quibbles about the tastiness of the food.  The rice and noodle dishes were both tasty, and the Tom Kha Gai was delicious.   The only disappointment lay in the level of spice – both the Koh Samui and Phi Phi were marked with two chillies on the menu, but neither had any discernable heat.

I also still wonder why Thai food is always priced at so much more than Chinese.  For something with seafood, €11 is a decent price, but the €10 fried rice dish didn’t have any particularly fancy ingredients.  It was very similar to a Chinese fried rice dish, just with ginger playing the role that MSG takes in Chinese food.  Local Chinese takeaways usually charge around the €7 mark for beef fried rice.  Is it just a novelty thing, because Thai is a more recent and less ubiquitious presence among our restaurants?

With all that said, I will order from Diep At Home again as the menu is really interesting and the portions are generous.  I’ll just take care to order something a bit more impressive and specify extra chillies next time.

Have you tried Diep?  Any other Thai takeaway recommendations?  Does the price discrepancy between Thai and Chinese seem fair enough to you?