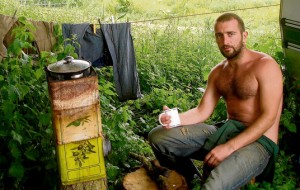 Mark Boyle has lived without cash for two years (Photo: The Irish Times)

Earlier this summer, I wrote about freeganism, where people salvage perfectly good food from being sent to landfill. It’s usually a sandwich or a carrot that was on the shelves just moments earlier, but was then deemed unfit for sale.

In today’s Irish Times, Conor Pope has an interesting piece on Mark Boyle, a Donegal man who has spent two years living without money:

His idea that no one wants to throw away food is hard to believe when you consider that a third of the food in Ireland and half the food in the US ends up in bins. That statistic is “absolutely insane and really depressing,” Boyle says.

Like all Pope’s pieces, the article is well worth a look – click here to read. Now, I know living without money wouldn’t be easy, but do you think you could do it? And if civilisation collapsed and all you had was your own resources, could you survive?