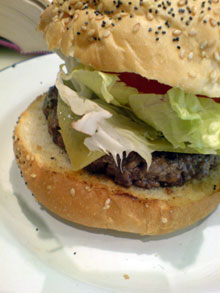 This week, I’m continuing my hunt for Dublin’s best burger.

A few weeks ago, I decided to give Bobo’s on Wexford Street yet another chance.

So when my friend Criostoir and found ourselves there, I was determined. This time, I’d love it. I didn’t want meat and I don’t like mushrooms, so I figured that a falafel burger, although knobbishly called “The Ranelagh” (€8.20), might be a good choice. After all, it’s falafel, and falafel’s always great, no? Criostoir went for a burger with smoked bacon and cheese (€8.20).

Even in a burger place, they should have figured out a good veggie option. Anything else is contemptuous.  But the “falafel” was served as one giant patty, which, the moment I lifted it, instantly fell apart and collapsed in a sadsack heap out of the bun. It had no texture, no consistency, and nothing but the chef’s wishful thinking to hold it together. Inside the bun was a horrible hotpotch of cucumber and a giant, roasted red pepper, which didn’t go well with the very badly cooked falafel.

Back before I could actually cook, I tried to make falafel, but it had to go in the bin; a good falafel is crispy on the outside and firm but light inside. What I made that day was miles better than this travesty. This was inedible- the worst falafel I’ve ever had – and another one I later regretted not sending back (I’d just completed several hours of very blissful meditation, so I blame stupid goddamn positive thinking). 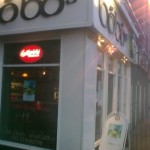 Criostoir’s gourmet burger was nothing of the sort, consisting of very bog-standard beef and a thrown-together, disinterested feel. Our chips, loudly trumpeted as freshly made and not frozen, made no impact on my memory whatsoever.

We’ve now reviewed Bobo’s on this site four times. The first review slagged off their fish burger – “so appalling that I was offended.” A full year later, in another review, Rercy was equally appalled to discover that they hadn’t got their act together and that the fish burger was as dire as ever. In a third review, Jean damned Bobo’s with faint praise.

A sign on the counter at Bobo’s loudly trumpets that they were one of The Dubliner’s top 100 restaurants about 6,000 years ago. That was an era when we way more tolerant of rubbish. But times have changed.

Sometimes, you have to give up on people, even the wayward little brother. In the same vein, I can no longer think of any valid reason to eat in Bobo’s. I’m going to stick a limb out to the guillotine and say that Eddie Rocket’s – directly across the road – offers a much better value and reliable proposition. Eddie’s burgers are nicer than Bobo’s, and just about as gourmet. Bobo’s offers constant disappointment and an obvious disdain for its customers, manifested in a willingness to consistently serve  below-par, unjustifiable food. Bye bye Bobo’s.

Later this week, I’ll review a burger place that deserves your business.