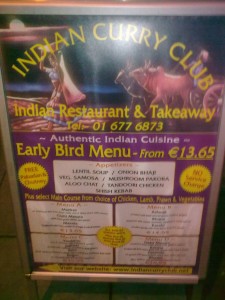 Restaurants don’t tout for business here. I’ve seen it along tourist strips and on various travels in non-Western countries, but until recently, I’d never seen someone standing on an Irish street trying to lure me in.

I’ve mixed feelings about it. On the one hand, the Indian Curry Club’s approach is far from intimidating: I was clearly scoping out their menu, and he merely pointed out that the early bird option ran until at least 8pm and told me that their food was excellent.

On the other hand, the menu and the prices speak for themselves, while Irish people are so polite – preferring to grumble behind people’s backs and quietly complain about bad service but never to their face – that it almost seems unfair to ask for our custom. Sure, we’d eat in there just to be polite.

All that said, the four early bird menus, beginning from €13.65, are very good value. Starter, main, and rice or naan are all included and diners can plump for the cheap option or splash by spending up to €16.95. It’s your typical Indian restaurant: not at the level of Jaipur or Ananda but still very enjoyable and completely acceptable to our satisfied party of six. Excellent vindaloo and madras options, washed down with large bottles of Tiger beer.

This is much more affordable than many other Indian restaurants in Dublin. With a generously late early offer, I’ll definitely be heading back for cheap eats again.