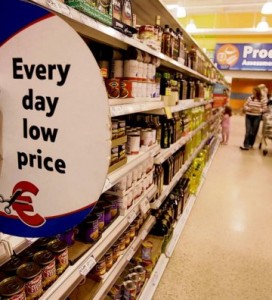 Sunday’s newspapers overflowed with big loud supermarket ads, each proclaiming they were cheaper and better and had more magical powers than their rivals.

Tesco shouted loudest, with almost every other page harping on about “1000 price cuts”. But these cuts, suggests Consumer Association of Ireland chief Dermot Jewell, are merely “smoke and mirrors… the illusion of bargains.”

Jewell was commenting on Conor Pope’s revelation, featured in today’s Irish Times, that Tesco significantly increased the prices of well-known products just weeks into the new year before reducing them as part of their latest promotion. For their part, Tesco say global commodity prices increased over the last few months

It’s hardly surprising; Tesco are notorious for such behaviour. It’s increasingly difficult to know whether you’re getting a genuine bargain or if you’re being elaborately conned.

Readers, do you feel the supermarkets take you for a ride with their advertised special offers, or do you think you’ve found real bargains?