Toto: It started off well...

I’m a liar. I’m a misogynist. I’m repulsive. I’m invisible. And I like eating food off dirty tables.

Actually, I’m none of those things, but that’s the way I’ve been treated in a series of Dublin restaurants and takeaways since I returned from India. The Parade of Bad Service shows no sign of ending, and I’m starting to fret at the very idea of eating out. It shouldn’t be so stressful.

Over the next week, we’re going to highlight examples of appalling customer service – before moving on to list some Irish restaurants where customers are made feel welcome and treated with respect and manners. We’ll finish off with a competition that we hope will make a small contribution to increasing customer service standards in Ireland.

Starting today with Toto, an Italian restaurant on Talbot Street

We’d just come out of a very interesting and entertaining talk on psychopaths given by the journalist Jon Ronson to promote his new book, The Psychopath Test. We ate because we were hungry, not because we particularly wanted to eat out.

Le Bon Crubeen comes highly recommended, but service has stopped by the time we got there. Down the street, there’s a nice little restaurant called The Italian Connection, serving the standard pizza and pasta dishes. I’ve eaten here a few times and always had good experiences.

But in my line of work, I’m always looking to try somewhere new. Hesitantly, Kate, Sorcha, and I peered into Toto’s, a restaurant just opposite The Italian Connection. It was around 10.10pm, and Toto was about half-full.

We each ordered a pizza, and licked our lips in anticipation. As we hadn’t any dinner, the very act of ordering had already made us even hungrier.

Twenty minutes later, we were starting to wonder where our pizzas were – by any standard, the restaurant wasn’t busy. After another five minutes, we whispered about the possibility of asking if they were nearly ready. But the waitress wasn’t particularly friendly, and we kept our counsel. Eventually, after half an hour, our pizzas were thrown in front of us. 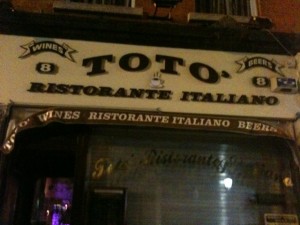 ... with customers still inside, the shutters were closed

Sorcha is probably the most easy-going and polite person I know, so it was with great reluctance that she told the waitress she’d received the wrong pizza.

“It’s pretty much the same pizza, it’s just a bit spicier,” groaned the clearly uninterested waitress, adding that it had one extra ingredient. “Will it not do?”

No apology, and clearly no intention of apologising. I bit my tongue. Sorcha very politely said that she wished she could eat the pizza, but it wasn’t what she ordered and that she really didn’t like spicy food.

“The kitchen is closed,” we were told. “The chefs finish at 10.30. They’ve cleaned up the kitchen, and they’re ready to go home.”

Sorcha was put in an invidious position: suffer the ire of the waitress and send the chefs back to work, or go hungry. She politely repeated that she just couldn’t eat a spicy pizza and was very hungry. The waitress said she would check with the kitchen and see what she could do.

Ten minutes later, Kate and I were more than half-way through our pizzas. Mine was mediocre, with briny, sour capers and cheap-tasting olives. Kate shared some of her pizza with Sorcha as we were all so hungry. The waitress was chatting to her colleague behind the counter, and we hadn’t heard whether Sorcha would be lucky enough to get any food.

I walked up to the counter, smiled at the waitress, and asked her if the third pizza was on the way. She glared at me in horror and told me that the kitchen had been reopened specially, and the pizza would be ready in a few minutes.

A few minutes later, she slammed it down on the table and walked away. Starving Sorcha, who had been made feel she should be grateful for the privilege of eating in Toto, ate the entire meal. The bill arrived. We’d been charged full price – €61.38 – for three pizzas and a bottle of wine.

We’d had enough. I called the waitress over, and expressed my surprise that we were being charged for the entire amount. I said that their mistake meant that Kate and I spent most of our meal waiting for Sorcha’s pizza, and we hadn’t been able to eat together. The waitress replied that it was not her fault – it was the kitchen’s. Sorcha pointed out that the chefs were not working front-of-house, but the waitress was.

I suggested it would be in order to charge Sorcha half-price for her pizza, or offer us “something” as a goodwill gesture. She said that there was no possibility whatsoever of reducing the bill, as “there is no option to do this on the computer”. She refused to acknowledge any failing on the restaurant’s part, pointing out the irrelevant fact that Sorcha had eaten the whole meal – despite the fact that the quality of the mediocre pizzas themselves were not the issue.

At this point, we asked to speak to the manager. “I’m in charge tonight,” she responded. I listed the customer service issues we’d encountered, and once again suggested it would be order to offer us a gesture of goodwill.

But she wasn’t budging – not even a complimentary coffee or dessert for Sorcha. That’s when I told her that her customer service was “a disgrace”, and asked for the name of the owner, which she duly provided. What followed was stunningly inappropriate.

“For a man to tell a woman she is a disgrace, that is terrible,” she said. “Do you know how to speak to women at all? Shame on you.”

My two female dining companions joined me in pointing out that her gender was utterly irrelevant, and to pull the misogyny card was a cheap trick. I was so incensed that I said I wasn’t prepared to pay the full price, and that she could call the Garda. She said that if we didn’t pay the full bill, she would do this.

I don’t know the law in this area, but I’m going to find out. It wasn’t worth the hassle, and we backed down. She loudly told us to pay our bill and then get out. None of us went looking for trouble, and we left feeling very stressed.

Next time, I’ll stick to The Italian Connection.