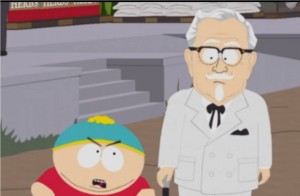 The lowest of the low: Eric Cartman and the Colonel

Last weekend, I suggested an “ironic” visit to the notorious, wildly popular meat market that is CopperFace Jack’s on Harcourt Street. I’m 30 and not a participant in the meat market, while my mate is married. Continuing a search through horrible scoring joints, we decided to pass and ended up instead in the equally awful but inexplicably popular Flannery’s on Camden Street.

As well as reminding me of the zoo, being in Flanagan’s reminded me of fried chicken. My analogy is less tenuous than it initially appears. If you’re going to wallow in bins, you may as well go for the fanciest skips.

Likewise, if you’re going to eat bad food, you may as well eat quality bad food. By this standard, KFC is better than those “ham and cheese pastries” you find in petrol station delis, Burger King beats KFC (“KFC is disgusting, not a guilty pleasure like Burger King can be,” says our Jean. “You need a shower after eating there”) and those gross Wimpy chains, Burger King is beneath Abrakebabra, Eddie Rocket’s is better than any of the above, and Zaytoon sneers at them all.

What defines a guilty pleasure? Writing about fried chicken (the only way to eat it is from a bucket, of course) in the latest Observer Food Magazine, food critic Jay Rayner says:

Faced by a choice between good food ideas done really badly and bad food done well, I will lurch towards the latter. It feels lovely at the time and awful afterwards. Which is the definition of guilt.

Some other guilty pleasures deserve a shout-out: Chicken Hut on Clanbrassil Street, Hillbillies in Cork, and Rick’s burgers. And while I love Nando’s and adored Crackbird (please come back!), I don’t really count either as a guilty pleasure.

What’s your hierarchy of guilty pleasures? Is KFC worse than McDonald’s? Does Eddie Rocket’s outshine Supermac’s? List them below!