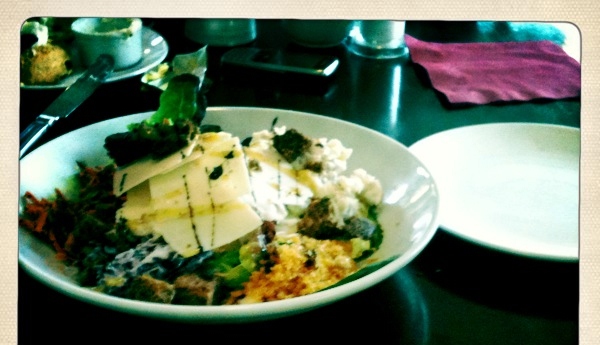 There’s plenty of gardens and parks around Ireland with a café tacked on. There’s plenty of places where an unimaginative display of cold quiche and lasagna, ready to be bunged into a microwave at a moment’s notice and served with a dull broccolli and feta salad, strikes a predictable deadness in our hearts. They’re like Avoca’s many mediocre, overpriced, and bizarrely popular restaurants – only worse.

I had roughly the same expectation of the oddly-named Jarrow Café, situated in Kilkenny’s Castlecomer Discovery Park. A few friends and I took a walk through this particularly enchanting oak forest last weekend, but we got caught out by torrential rain at the end.  Remember sheltering under a tree? It doesn’t work.

We ran the last few hundred metres and flung ourselves across the café’s threshold. The building itself is a bit of an oddity: the rather ugly exterior is dominated by a sloping, tiled roof, supported by wooden panels and large windows. It’s more pleasant inside, with the well-lit café occupying half – and no more – of a rather underused space.

But this is no Avoca Lite, and it turns out that Jarrow Café has deservedly built up a loyal customer base. It’s self-service: order at the counter and they’ll bring your food over.

The menu is seasonal, so the hot food options were few and far between in a menu dominated by salads and sandwiches, alongside soups and baked potatoes. We opted to share a salad of “Warm Laviston Chilli Sausages, Roast Root Vegetables, Hazelnuts, Parmesan, and Mixed Salads”, but they were all out.

So we reluctantly agreed on a salad of “Chicken Breast with Walnut Croutons, Parmesan Flakes, and Caesar Dressing with Mixed Salad.” Caesar salad, yaaaaaaaawn. But this was really, really good, and beautifully presented. The proper, fresh chicken – rather than the awful, awful, awful compressed chicken breast or pieces beloved of far too many awful, awful, awful cafés – formed the centrepiece. It was topped by generous parmesan flakes, and laid on a bed of crisp and juicy lettuce. A zingy carrot salad and a fresh and creamy potato salad dotted the edges of the plate, with crispy walnut bread croutons scattered across it. Considering the quality and portion size of this dish, its €10.50 price tag is relatively reasonable.

My friend Paul had a warm fresh scone loaded with butter, jam, and cream, while Roisin and I shared a Rocky Road where they’d clearly used proper, good quality chocolate in making the biscuit. Two delicious lattes didn’t disappoint either – smooth, sweet, and nutty. Somebody here really cares about food and ingredients.

Despite the tourist buses that pile in to the arts and crafts centre, the crowds don’t tend to spill too far beyond that, so the surrounding forest is a perfect spot for a secluded walk, and a late lunch in this little gem will round the day off nicely.