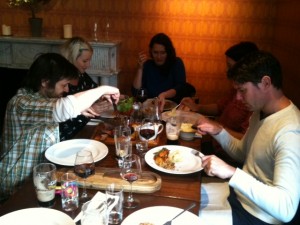 I’m always bleating on about how the M&S Dine In for Two for €12.50 offer is the best food deal in Ireland. I’d never found a restaurant that could match it. Until now – and from a rather unexpected quarter.

The invitation was for four people, but when I spread the word, our party rapidly ballooned to thirteen: nine adults and four kids, including my Cheapeats partner Jean, our old Cheapeats sparring partner Rercy, and a journalist colleague and friend. All were lured by a chance to catch up and a deal that sounded too good to be true. 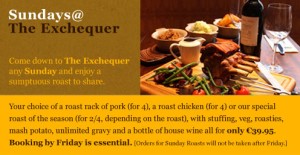 When I rang to book, the manager was genuinely enthusiastic and helpful, suggesting that the roast chicken is a good option with kids in the party. This was long before he knew “who I think I am”.

The entire afternoon felt like an ad for the joy of Sunday with friends. We pushed two tables together and took over a large part of the restaurant, while the kids had their own table just beside us. Jenny got the cocktails rolling with a deliciously spicy Bloody Mary. The beer and wine then started to flow, and it wasn’t long before two big hunky ribs of beef arrived at the table, which we carved ourselves. As there was nine of us, we decided to bulk it out with a few extra sides. 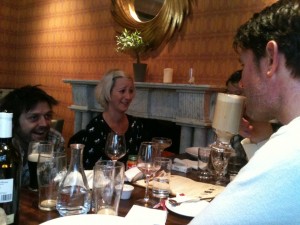 This offer sounds great, looks great, tastes great, and is great. There was plenty of food here for four. The meat was fantastic: cooked medium as ordered, succulent and juicy, and with a smell that brings back the warmest Sunday memories.

I’ve always believed that gravy should be reasonably thin, and indeed this is how it’s served here: rich, mouth-watering, and well seasoned. At least two of the adults here were reared on thicker gravy, but both praised The Exchequer’s saucy goodness. It was nearly good enough to drink from the train, and we quickly ordered more.

One of the biggest surprises was the stuffing. Most places serve a depressing, flimsy scattering of mildly seasoned dust and call it call it stuffing. But this was big, chunky, nutty, and full of herbs and flavour. It was devoured; I’ll ask for extra next time. The Dijon mustard was also very, very good: nice and creamy and spicy. Condiments are something a lot of restaurants think they can skimp on and get away with, but the quality of the mustard and stuffing showed off this place’s close attention to detail. Veg were roasted rather than boiled to mush, and the champ was delicious – not a hint of that sour milk taste that infects the average mash. 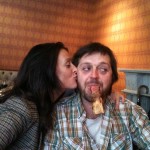 Rercy with Dave: he was determined to dry the marrow from the delicious bone

This is a deal that should be compared with carvery. An average carvery consists of meat that’s been sitting under a heat lamp for a few hours, a load of mushy, tasteless veg, overmilked mash, roasties that taste just like they came from a packet, and a slathering of some Bisto gravy. It’ll cost anywhere between €10-15, before you add in a drink.

Here, you’re getting a delicious joint of meat, freshly cooked just for you, faultless trimmings, gravy that I’m still dreaming of, and a glass of wine for just €15 per head, or €10 per head if you choose the pork or chicken. If you cooked a meal like this at home and factored in a bottle of wine, it’d come very close to the same price, and with all the hassle that attend making a roast. I suspect that The Exchequer couldn’t possibly be making any money on this deal, but perhaps they make it up on drinks and desserts. 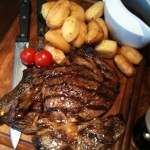 Desserts were great. Plum and lime jelly with ice cream seemed like an odd addition to the menu, but it was excellent – fuzzy and loaded with fruit, it melted on the tongue rather than slid down the throat. Mark and I agreed to share a white chocolate cheesecake (ace!) and a raspberry and almond tart. He wasn’t at the table when they arrived so I ate most of it and then we fought like babies over the scraps – only he’s the youngest of four brothers so I picked a losing battle.

We were quite a demanding group and certainly kept the waiting staff busy, but they were really friendly and dealt with our group very well. The (very well behaved) kids were a pleasure to eat with, and they all seemed to have a nice time too. One of the nicest Sundays I can remember, I’ll definitely be back here. Highly, highly recommended.