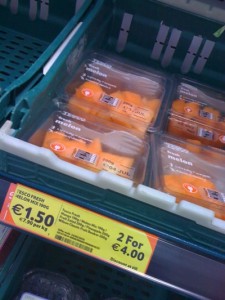 Tesco has been fined €600 for charging more for goods at the tills than the price displayed at the shelves. But much like you or I would be oblivious to a one cent piece at the back of a drawer of odds and ends, Tesco won’t miss this €600.

Ireland’s largest retailer was convicted for breaches of the Consumer Protection Act 2007 after an action was taken by the National Consumer Agency. The fine is a pittance, but at least it’s an embarrassing slap on the wrist to Tesco, right?

Not really. Tesco have massive buying power in Ireland, and a massive marketing budget to boot. The Tesco behemoth will brush off this tiny embarrassing gnat, which only got decent coverage in The Irish Times and thejournal.ie, and business as usual will resume.

In a dismissive statement, Tesco said: “It is our policy to have clear prices in place at all times. Across all our stores, we have 2.7 million price labels up every day; last year, the NCA found mistakes in 8 of these. This was as a result of human error during a time of major change in our stores. It should not have happened and we greatly regret it. Improvements have been made to our processes as a result.”

Except of course, it’s not an isolated incident. There’s a compelling book of evidence to show that Tesco – intentionally or not – regularly misleads its own customers: 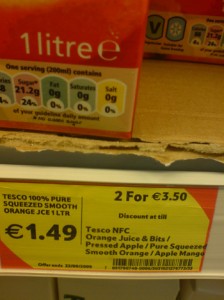 The giant multinational made an estimated €200million in profit last year and, despite the slowdown, is on course to increase this figure to €285 million by 2015.

I’m under no illusions that this post will make an impact on Tesco’s lucrative bottom line. The Irish Times is one of the few mainstream publications to consistently highlight swizzery at Tesco, and yet the supermarket’s profits continue to rocket. Both shoppers and producers will continue to be fleeced by them.

I’m quite baffled as to why, despite repeated evidence that Tesco cannot be trusted and are bad value, people flock there. But I may as well be the Skibbereen Eagle wagging my finger at the Russian Tzar.

So, I’m really interested: do you shop in Tesco, and if so, why?