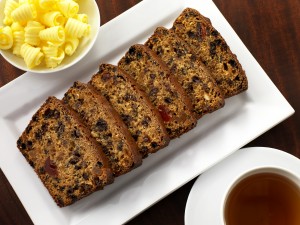 Halloween is about death, fun and cake. This weekend, Cheapeats – also known as Jean and I – are holding a cake sale in The Grand Social to raise money for children’s charity Barnardos. We’d love, love, love you to bake something for the sale and bring it along.

Resident ireland am cook Catherine Leyden has sent on some recipe ideas for simple, Halloween themed treats. We’ll start off with her recipe for tea brack: the quintessential Irish Halloween cake.

We all know that the brack contains a coin, and whoever finds it is supposed to become wealthy. But did you know that people once inserted various other items in it: a rag to symbolise poverty, a ring to symbolise marriage, a thimble to symbolise spinsterhood? It can all be traced back to the belief that, as the seasons changed and we found ourselves between two different states, the barriers separating our world from the next thinned, and ghosts and fairies passed with greater ease between the two. People also believed that, because of this thinner barrier, we could see into the future – hence the popularity of divination games at Halloween.

Folklore aside, do you have a cake recipe to share? And will you come along to our cake sale? 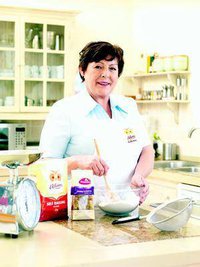 Melted honey or golden syrup may be brushed over brack before cutting.