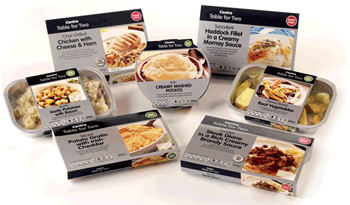 M&S started it all with their then-astonishing and still-impressive ‘Dine in for Two for €12.50’ deal.  Its popularity inspired a lot of other supermarkets to start offering meals for two or four, all for an attractive low price. Tesco have their Dinner for Two for €12 (it’s not as good as the M&S deal but still better than you’d expect), SuperValu and Superquinn do offers on family dinners, etc.  And now Centra are getting in on the dinner deal action, with their own Centra Table for Two offer.

The Centra Table for Two just offers two dishes, a main and a side, but seeing as it only comes in at €6, you can’t really complain.  The food is surprisingly rich for such a cheap deal – the mains include Steak Diane, Haddock Mornay and Chicken with Mozzarella and Bacon. The sides include Creamy Mash, Potato Gratin or Root Vegetables.  Centra very kindly sent us a few of the dishes to try out, and I was pleasantly surprised at the quality of the Steak Diane. Often, ready meals that describe themselves as ‘Steak’ instead turn out to contain stewing beef, but this had real slices of thin steak and a good flavoursome sauce.  The Root Vegetables came lightly precooked – I found mine turned out a little soggy, but scooping out some or all of the huge chunk of garlic butter that accompanies the veg would probably remedy this.

It’s all quite processed and there aren’t any healthy choices, something that would stop it from being a regular option for me.  The M&S Dine in for Two Deal is a lot more appealing – you can pick fresh ingredients and healthy options for the main and the sides, and for only €6.50 extra you also get a good quality dessert and wine. But having said all that, the M&S deal is only on once a fortnight, and there’s a Centra on every corner.  I can definitely see the appeal of this offer if you’re a bit broke and a bit tired and feel like something filling and creamy on the way home on a dull day.  Plus if you mix it up a bit – do crispy roast potatoes and green beans to go with the Steak Diane for example, or save the Creamy Mash to have with some good sausages, it could also come in quite handy.

Have you tried the Centra Table for Two deal?  What do you think?