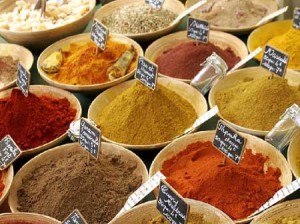 Our writer Julie asked an Indian friend to show her around Eurasia, an Asian mega-mart in Liffey Valley and give her some expert tips. She got such a wealth of information that we”re giving this whole week over to Julie”s Asian Supermarket Tour.  Follow the blog all week for some great tips and recipes.

We all know Asian supermarkets are the place to go for cheaper spices, nuts, Bombay mix, naan breads and, em….stuff.  Did you ever look at people filling up their trolleys and wonder “What are you buying?”

“What are you buying?” I asked my friend, Radha, a Food Scientist from Southern India.  She’s buying spices and breads, frozen desserts, healthy ready-made meals, treats for her kids, pulses to make a million things, natural remedies and vegetables, so many vegetables.

First things first though, and we head for the lengthy spice aisle. Turmeric is a popular ingredient and also the reason behind such low rates of stomach problems in India. Try water with a pinch of turmeric every day to cleanse your system and help protect against cancer. Sugar candy is another old remedy found in the spice aisle. A lump or two in a glass of water will reduce a child’s temperature- I can vouch for this.

Armed with some staple spices you can make anything. They’ll taste better and last a couple of years in your fridge if you toast and grind the seeds down, rather than buy the powder. We”ll share the recipe for Radha’s Vegetable Biryani (with basic ingredients) later in the week.

Packets of spice mixes can really speed up your curries though.  Instead of using minced beef for the same old dinners, try making a qeema (mince) curry. Fry off onions with spices (a ready-mix or  your own) and add mince with some salt, turmeric and chopped coriander. Mint and coriander on your windowsill not only make you look like you know what you’re doing but are handy for emergency mojitos.  Grab some chickpeas for an easy Chana Masala (recipe coming up).

Priya instant meals here are a far cry from Pot Noodle. Radha  says the lentil, tomato, mango and spinach dals are all tasty and nutritious. Just heat them up and throw them into a wrap or with naan or chapatti. There are loads of  Priya pickles you can put on the side. Another handy option when you’re tired and hungry is to stir a teaspoon of pickle into a small bowl of rice.  Nicer than blando leftover rice salad. Rice and flour are much cheaper here and in several varieties as each Indian state has their own favourite. Like most people from Hyderabad, Radha eats Sona Masoori (and Basmati for biryanis) and says it’d be hard for her to digest another type. She says rice cookers (€16.49 in Argos) make perfect rice.

We’re in Eurasia Supermarket beside Liffey Valley by the way. In addition to groceries, it has a sweet counter, deli, green grocer, butcher, boutique, household section, travel agent, barber and beauty salon. There are family favourites, rice puddings, custards and jellies in abundance. There’s great value in huge cans of olive oil, boxes of dates and cashew or almond powder (try making courgette soup with some cream and almond powder).

The Jedwardian coconuts look exactly like the ones in Enid Blyton coconut shies. Hindus sacrifice the hairy tail so the round ones in other supermarkets are rubbish for this.  Deep-fried snacks like Bombay mix are cheap here but quite easy to make, according to Radha.  Mix gram flour, turmeric, salt, pepper and water to make dough and push it through a potato ricer into hot oil. They’re ready when they float. Yum. I’ve to go. I’m hungry now.

Next up: Radha’s recipes for Chana Masala and Vegetable Biryani