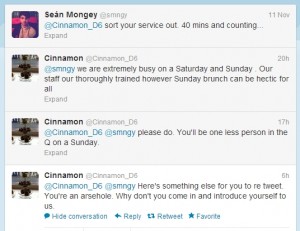 I’ve no idea why Cinnamon in Ranelagh is so wildly popular for Sunday brunch. It’s jammed with buggies, the food is average and unreliable, and their customer service has been widely slated by bloggers, reviewers, and the public.

I didn’t realise quite how dire it was. Yesterday, they publicly called one of their customers an “arsehole” on Twitter.

The customer said that he had been waiting 40 minutes for service, that Cinnamon was a “pretentious creche”, and that he would not be returning again. The response: “Here’s something else for you to retweet. You’re an arsehole. Why don’t you come in and introduce yourself to us.”

The management have wheeled out the old “moment of madness” cliche, and apologised to customers the offence caused. The staff member has been disciplined.

Now: the cheap eats bit. To counter the very bad publicity, Cinnamon is offering €1 coffees for the next seven days to any customer who mentions “Twittergate” when ordering. The restaurant pointed out that the restaurant is always very busy and they were overwhelmed.

Frankly, rubbish. The “a**ehole” comment is actually just the thin icing on a very large Cinnamon cake of arrogance and rudeness. What’s most appalling is telling a legitimately aggrieved customer that they couldn’t care less if he went elsewhere because “it will be one less person to serve on a Sunday.” They can add me to that list of customers that won’t be causing them such hassle by dent of giving them my business. As for the service, if a restaurant that has been open for more than a year still can’t get the basics right, I’ll pass and go elsewhere – €1 coffee or not. It’s not like there’s no competition in the area: Dillingers and Eatery 120, for starters, also do good brunches.

Readers, do you go to Cinnamon in Ranelagh? Would you even pay €1 for a coffee here? And have you encountered such miserable service in a restaurant, or rudeness online?