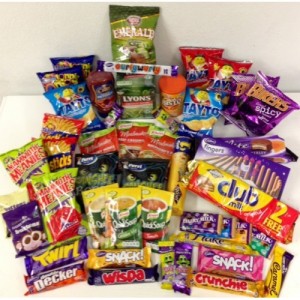 There’s a hamper of Irish treats for grabs over on the WorldIrish website. Bags of Tayto and Banshee Bones (surely one of the most quintessentially Irish snacks), Cadbury’s Curly Wurlys, and Chef ketchup sit alongside some very 1980’s packets of soup and – ugh – Club Milks. The hamper is provided by Foods of Éire.

Not the healthiest box of treats, no, but still enough to keep you sásta for at least a month. And probably reassuring for Irish emigrants in desperate need of a Tayto fix – although I’ll take a packet of King over Tayto any day.

Irish food isn’t always ham and cabbage or Irish stew: it’s also bags of Chipsticks and Snack bars. In my fantasy hamper, which isn’t restrained by laws of physics and chemistry and can travel all over the world without going off, I’d include red lemonade and Club Orange. Hicks sausages. A Wibbly Wobbly Wonder. And Brennan’s white bread, even though I only ever eat it when I’m straight off the plane after being abroad for a while. For Donegal folk, a bottle of Football Special – do they still make this? – might be that little taste of home.

What are your favourite Irish foods, and what would you put in your fantasy hamper?