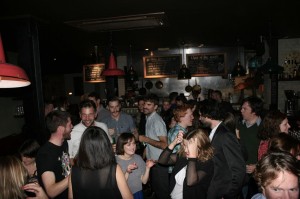 I’ve found my favourite way to spend a Sunday. It involves eggs and sweet disco tunes! The Gentleman’s Academy Disco Brunch spent 2012 establishing a name as one of the most unusual and fun events in our fair city. I’ve been to a couple at this point, once last year, where I remained sober, just enjoying the food and soaking up the lovely atmosphere. And another, this year, where I got very merry on delightful cocktails and danced my socks off till the wee hours.

The disco brunch is usually hosted in Coppinger Row, consisting of a seated meal lasting a couple of hours, soundtracked by mellow tunes from DJs Chewy, Ghostboy and Rocky, after which tables are pushed back and a full-on disco ensues. I went with a group of four the last time and we all ordered Pulled Pork served with Potato and Red Onion Hash, Poached Egg and Chipotle Creme Fraiche, which came with sides of chips and salad. The pulled pork was outrageously good, everyone loved it. I heard several reports that the Eggs Benedict was great too. If our food was anything to go by, and based on gawking at our neighbours’ dishes, you’d be safe ordering anything from a short but interesting menu. You also get a cocktail on arrival, included in the price, there was a choice of Bellini or Bloody Mary, both of which were made with quality ingredients and heavy on the booze. Some nibbles were served later on in the evening for people who were feeling a bit peckish, I believe they were delicious but I missed out as I was too focused on trying every cocktail on Coppinger Row’s extensive drinks list.

To say that the day is fun is an understatement, the atmosphere, food and music are all excellent. I had such a ball at the last one and the day carried on very long into the night, with many people leaving the Disco Brunch (which wrapped up in Coppinger Row at about 9pm, having started at 2pm) to go onto the official afterparty in Ukiyo on Exchequer St, where the DJs treated us to even more delectable disco music. Luckily my weekend runs on a Sunday and Monday but some of my companions that day were up early the following morning, so they toddled off home tipsily at around 11pm delighted with themselves, having gotten the most out of the fun but not suffering too horrendously the next day. A combination of tasty food and great music, now that’s my kind of Sunday.

The Gentleman’s Academy Disco are hosting an Disco Brunch Easter Sunday Special in Damson Diner on March 31 at 2pm, tickets are €25 and go on sale from Monday, March 25. The Disco Brunch is a unisex affair, but for all the gents out there, they also have lots of other interesting events worth checking out, the next one is an Oyster Masterclass on Tuesday the 26th of March. You can follow them on Facebook or check the website for more details.