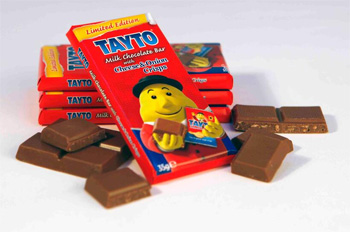 The evil geniuses at Tayto recently pulled off a PR masterstroke while simultaneously going into bold new flavour combination territory, with their Tayto chocolate bar. This bar is milk chocolate with shards of cheese and onion crisps throughout it.

The combination of salty and sweet is long established; and works beautifully with things like salted caramel.  The combination of chocolate, cheese and onion is slightly less delicate than salt and caramel, however, and isn’t often seen outside birthday parties with over excited five year olds.

We were sent a few bars to try, and our reactions ranged from ‘OFFENSIVE!’ to ‘meh?’  Peter absolutely hated it. I was a little surprised at how mild tasting it is; the chocolate is just slightly below bog standard milk chocolate and the crisps don’t even register until the aftertaste.  Then I experienced a minor but persistent onrush of stale crisps.  I ate one square and had no desire to try any more.

I brought one of the bars into work so I could taste test and get as many reactions as possible. Here’s a selection:

(As I approached with the chocolate) “GET THAT THING AWAY FROM ME!”

“I’m annoyed that I didn’t get to enjoy the three packs of crisps that it feels like I’ve eaten.”

“I would eat that again.”

There was a lot of muttering about aftertastes and many hilarious aftertaste faces were pulled.  In fact the word ‘aftertaste’ was still being heard around the office hours after the chocolate was long gone.  Many comparisons were made to Marmite, but I don’t agree – as I said above, I found it surprisingly mild.  Lots of taste testers said it would have worked better if it was Cadbury’s Dairy Milk chocolate, but I’m not convinced that any chocolate marries well with onion.

However you feel about this chocolate, it can’t be denied that Tayto have really got people talking about Taytos a lot. Whether it’s even possible for Irish awareness of Tayto to get any higher (many Irish people grew up thinking all crisps are called Taytos) is another question.  The bar is a limited edition and should be on sale now in Londis, Gala, Costcutter, Topaz, Spar, Mace, Eurospar, Daybreak plus other select retailers.

Have you tried the Tatyo chocolate bar?  What did you use to get rid of the aftertaste?