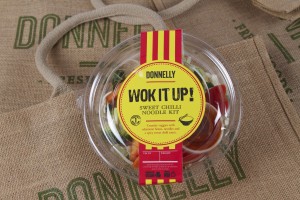 Food writers are lucky enough to receive lots of samples in the post from time to time. These samples tend to consist primarily of fatty and sugary foods.

Recently, we received a big giant box of many different salads from a PR company representing Donnelly’s Salads, an Irish owned company based in north Co. Dublin, where most of the salads are grown. I fretted over what to do with many different bags of salad. It scared me: salads get all mushy down the bottom of the bag and go to waste.

But it made a healthy, healthy change from boxes of cake, so it was gratefully received. The usual mixed leaves were in there, but some of the salad kits are a little out of the ordinary, such as the Irish Growers Salad Choice Bag (€3.50), which contains a variety of tender pea shoots, toasted pine nuts, and a basil drizzle. There’s also a bacon Caesar salad for €4.

I particularly liked the Wok It Up combinations: a bowl of noodles, veggies and sauce for €3, which are wok ready. I added some chicken to the Oyster and Soy Noodle Bowl, and there was enough for two. Veggies were crunchy and fresh and the stir-fry was juicy and tasty. I visited my relatively critical parents – where do I get it from, eh? – and donated the Sweet Chilli Noodle Bowl to them. Very positive reports and a statement of intent to buy the product again.

There was also a Mex it Up! Fajita Kit, costing €2.75. It’s just a mix of sliced onions and mixed peppers with a sachet of fajita seasoning, and I was less sold on this: how difficult is it to slice a few onions and peppers? Fajitas are already so simple and easy to make. Still, as we had it, we made some juicy steak fajitas – fry up the onions and peppers, add some chopped steak to the pan, throw in the mix, and put it all into a tortilla with some sour cream or natural yoghurt, and a hot sauce of your choice.

Donnelly’s salads are stocked in many different locations, including Aldi, Centra, Fallon and Byrne, Spar, Superquinn, and SuperValu.