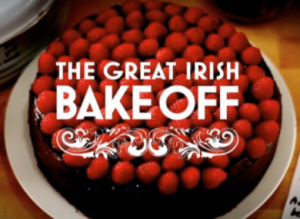 The Great Irish Bake Off semi-finals certainly provided horror for Hallowe’en night.  Instead of blood-soaked teenagers running for their lives, we had soggy crab tarts. What demons had stolen Maryanne’s sunnies and  Stephen’s shorts? Why were they making a two-course meal for a baking competition? Strangeness was afoot….

“It’s the semi-final!” said Paul, “It’s a massive, massive challenge!”  The challenge was another cake. A “Journey Cake”  to represent their time in the Bake Off.  Disappointingly, nobody went for the soft rock/Sopranos/New Directions option.

“I can’t experience or enjoy anything I bake myself” explained Will as he poured lurid green cake mix into a tin. He presented a tricolor cake gaudily iced with blue and red for his Irish/Dutch heritage. Maybe he thought he was on “Who Do You Think You Are”.  Paul asked if it was supposed to look that way, as it was “almost blinding”.

Oonagh was toasting her success with a champagne-based cake, which she held to her ear to see if it was done. She’s a breath of fresh air, but I hope she didn’t jinx things with the champers.  “I’m in the semi-final now and I’m kind of saying to myself, you know what, I can bake”. Sssshhhh, Oonagh, don’t tell them that. It didn’t look great but Biddy fixed her with a stare saying “I want you as my flavourometer in my house, FOREVER”.  “I’ll be there” promised terrified Oonagh.

Stephen had a blueberry cake with some convoluted story about bilberries and Celtic Olympics and everyone being skilled and strong. His layers all leaned to the side. Maryanne made a Frasier cake, as that won her Star Baker in Week 3 and incorporated praline, only remembering to put it in at the last minute, just like in Week 5.  Paul wanted figurines on top to show her journey. I just wanted a marzipan Tony Soprano.

The Technical Challenge was Biddy’s crab and seabeet tart with wild garlic leaves served with a sabayon of white wine and rock samphire followed by a carrageen mousse with a berry compote garnished with crystallized wild flowers and served with whiskey snaps.  They all looked like they just wanted the whiskey. Fair enough. Maryanne kept on asking everyone what to do. With booze fumes in the air would somebody finally throw a punch? Paul expressed his dislike of carrageen several times. The fact that most of the carrageen mousses had collapsed made them less appetising. Will’s held together but were upside down, maybe an ode to some Australian heritage.  Despite her tart being completely undercooked, Maryanne got Star Baker. Poor Oonagh got the heave-ho.

So it’s chilled-out Stephen, wound-up Maryanne and headstrong Will in the final. We see glimpses of next week’s challenges which involve gingerbread metropolises and balloon-bursting. “This has everything, it’s just fantastic” says Paul as he slices into a massive hall door. Whatever floats your boat. All the contestants will be back next week for a garden party to stand at the back of the tent as the winner is announced. Who is deserving, in your opinion?