Peter is one of the editors of CheapEats, and lives and works in Wicklow.

I’m a huge fan of the flavour, freshness, and variety of Thai food. KinKhao, a small and unassuming eatery in Athlone, Co. Westmeath, is my favourite Thai restaurant. This place does all the old favourites, such as curries and stir-fries, but they also have a great selection of regional Thai dishes. Really friendly staff, very reasonable prices and quite possibly the best Thai food in Ireland. They recently opened a second branch in Gorey, Co. Wexford, and I hear it’s just as good.

Sometimes fast food is exactly what you want, especially at lunch or the end of a busy day. It fits your bill perfectly, even if the usual suspects – McDonald’s, Burger King, Eddie Rocket’s, and the always astonishingly bland TGI Friday’s – don’t.

Nando’s, which opened a few months ago in Dundrum, is head and shoulders above most other fast food chains. It specialises in Portugese Peri-peri spicy chicken, but also does really good burgers, pittas, vegetarian options, and sides. I had a really tasty ¼ Peri-Peri Chicken (breast and wing) with two sides, chips and a grilled corn on the cob, for just €9.95. It was filling, the staff were genuinely helpful and happy, and there was no sense of having to rush or leave as soon as I was finished. This place should give those gourmet burger joints a run for their money.

Middle Eastern, Mediterranean, and Turkish food are bloody marvellous. This little gem at one of Europe’s most renowned museums, the Chester Beatty Library in Dublin, really looks like a café in a museum. It serves up generous, gorgeous and colourful lunches in a buffet style for around €10, and it can be booked in advance.

Oddly, there’s three of these places within a stone’s throw of each other in town, but only the one on Exchequer St. stays open for dinner. This is a cheep and cheerful French bistro serving up great dinners and café food. It has a relaxed atmosphere and serves up massive portions of French food that are just as good as places charging much more. At dinner, I had a Beef bourguignon with sides, while a less hungry friend just had a French Onion soup – not a peep of protest from the waiters. I’ve also enjoyed the fresh fish and the duck confit dinners.

Lunches of quality Croque Monsieur, quiches, or soup have always gone down well; you’ll get a bigger lunch for mostly between €11-14. Most dinners between €12-19, with the bulk of them at the lower end of that scale . Wash them down with one of their glorious cakes from behind the colourful, oh-so-French pastry counter.

I couldn’t decide which I preferred so I chose them both. Cornucopia on Dublin’s Wicklow St. blazed a trail and still serves hearty, delicious and comforting veggie dishes, soups and salads prepared with love and care; their excellent cookbook is the story of this love. Open till 9pm during the week, 8pm Saturday, 7pm Sunday, you’ll get a reliable, substantial lunch or dinner with two salads for €11.95-12.95.

Café Fresh in Powerscourt Townhouse Centre probably draws in more carnivores than vegetarians, and shows how veggie food is delicious in its own right. Like Cornucopia, the menu changes daily and they have a cookbook. They’ve great specials and you can take away three frozen meals for €18.50 or three frozen soups for €8.50.

A city the size of Dublin is really lucky to have two vegetarian restaurants of this calibre. Govinda’s is good too, but I’ve yet to try Juice on George’s St, and can’t wait to get to Café Paradiso in Cork. 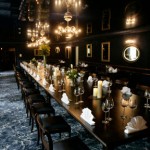 Not exactly cheap, but it’s worth every cent. For €65 per person you get an incredible five-course feast of the finest organic foods, outstanding service, and a fun, opulent atmosphere.Part of the Brooklodge Hotel and Wells Spa, The Strawberry Tree near Aughrim in Co. Wicklow is Ireland’s only organic restaurant. While the ingredients are always top-class, they’re just the cherry on the cake – it’s the meals that makes this place worth the trip.

Great meat, fish and vegetarian options. On previous visits, I’ve had rich Beef Broth; a Yoghurt and Black Pepper Sorbet and the following mains – they’re a mouthful: Organic Lemon Chicken with Red Pepper Stew, Black Olive, and Guacamole; and Baked Wild Hake, Wild Pollock Roe Crust, Spinach and Wild Prawn Bisque. Unlike many places, desserts are a central part of the meal, never an afterthought: I could wax lyrical about them for hours.

Without fawning or pretentiousness, the staff and manager treat each customer like the most important guest they’ve ever had. It’s always a great night out at great value.

I’d only stay the night at the hotel once a year, as I live a short distance away in a cab. But it’s well worth a weekend away, or you could even stay in one of the many B&Bs in the gorgeous rural village of Aughrim – there’s great walks around. My favourite restaurant in Ireland.

I’d quite like to go to go to the pub for the night and have a really decent feed. But most pub-food, though alright, is nothing special. The Bull and Castle at Christchurch, Davy Byrne’s off Grafton St., The Market Bar on Fade St, Gastropub in Dun Laoghaire, and the unique German and Irish food at the Roundwood Inn in Wicklow are obvious exceptions, but I struggle to think of other places.

The best chance of survival for pubs is food. Across the country, they should be competing with the best restaurants to offer different types of quality food at a range of prices well into the night. As I wrote before, some pubs in the UK are even offering good lunches for £1.

There used to be a big beer-hall style Belgian place called Belgo in Temple Bar, but it didn’t last. German-style food might bring to mind sausages and pickled cabbage, but it’s actually very simple, homely and tasty. The Roundwood Inn in Co. Wicklow shows how to do it properly; it’s a quiet, local, rural pub at night without the touristy trappings of somewhere like Johnny Foxes.

Big gutsy portions and a few German beers in a beer-hall setting make for a very enjoyable and affordable dining experience. It’s about time Ireland had some.

We’ve got a few Moroccan and Middle Eastern/ Lebanese places in Ireland but few Turkish places apart from the pricey (but delicious) Layla on Pembroke St., one or two around the midlands, and a few Turkish dishes in the gorgeous Silk Road Café. I’ve eaten plenty of it in other cities (especially Istanbul) and I was enchanted. Earthy, exotic, and full of fresh herbs and spices, Turkish food is quite different from Middle Eastern. It can and should be offered at an affordable price.