Buy this book on Amazon.co.uk

Learning how to cook, Step One: Find a cook book with easy recipes and pick something, the ingredients for which you recognise and can locate. This cold cold week, easing into things, I thought I’d give Jamie Oliver’s Ministry of Foods a go, given that it’s meant for people like me and the recipes satisfy Step One. I started with his pea and mint soup. It sounded easy, it looked green and spring is coming…this is what I discovered:

When beginning a process such as this one, the first thing you should do is eat some cake. This will serve two purposes: It will make you happy; and it will make you feel guilty enough to cook up something nice and healthy like pea and mint soup. After that it’s easy, suspiciously easy. You chop up two carrots, you slice two sticks of celery, you chop two medium onions (What is medium? Can anyone tell me?), crush and slice two cloves of garlic (I added an extra clove because mine looked a bit small…does this mean they were medium?), if possible without breaking the chopping board (ahem) and then you bung them into a saucepan with two tablespoons of oil on a medium/low heat for as long as it takes for the carrots to soften and the onions to golden up. Jamie O says this takes ten minutes; I took twenty. I think this was because I was so worried about burning everything I had the heat on ultra-low. Time enough for heat when I have a notion what I’m doing. That’s what she said. 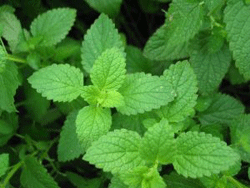 While you’re waiting for the softening/goldening, stick a couple of stock cubes in 1.8 litres of boiling water and let them dissolve. When the time comes, pour the stock over the veggies and add 800g of frozen peas, bring to the boil for a sec and then turn down the heat until it’s simmering (I believe this to mean that it bubbles away a little without going to town) and leave it like that for about ten minutes.

At this point you might think about having a glass of whisky (or even whiskey; I’m not prejudiced), especially if, in all the excitement, you forgot to put on the heat in your house and your toes have gone numb. Alcohol will actually bring down your body temperature but it may also make you happy (see cake comment above) and pass the time until everything’s nicely cooked up.

Then, whack in what Jamie calls “a small bunch of mint” (What does this mean? Through a whisky haze I took it to mean about a handful. Better too little than too much I thought, can always add more later). Then whizz it all up until it’s nice and green and smooth. Jamie suggests some optional ham. 300g he says. I had 150g because I’m an idiot and forgot to bring the recipe with me to the shops, but it still worked out ok. Probably could’ve been better quality ham really, for the classy soup-consumer. Rashers would’ve been more bacony and hearty so maybe I’ll try that the next time. But overall, damn (I’ve been watching too much of The Wire), that is some tasty soup. And I made it without any major drama (the chopping board was old; it was its time). My housemate, creatrix of the happiness cake (see above) and thus no stranger to the ways of the kitchen, is in agreement on the tasty front. Let me know how you get on, and if you have any tips for greater results!