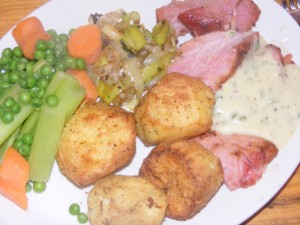 Old age is turning the snow to slush, but we’re still stuck here. AA Roadwatch informs us that Sallygap, Roundwood and the Wicklow Gap are all impassable; we live somewhere between the latter two.

A neighbour says that he went to the village for supplies and was sliding all over the road. Tomorrow, we’re going to get a man to clear the big laneway by our house. From there, we’re going to try and get a car down a big, steep hill. But if it snows again and the thaw returns, it’s back to hibernation.

The store cupboard is rapidly depleting, but we’re finding uses for what we have. Yesterday, for example, we managed to get through a whole jar of English mustard that’s been malingering around for eons. We’re also varying recipes to suit. One of these will be humous with no lemon or fresh coriander – not sure how that’s going to work out.

Yesterday, the moment come for the emergency freezer ham. It was just over €5 in Kavanagh’s butcher, Roundwood, which is a lot cheaper than an inferior joint I got in Dunnes. But after I made a miserable travesty of a boiled ham a few months ago, I wanted to do something different, something that would accentuate the sweet sweet sweetness of sweet sweet pork.

We boiled the ham for 20mins per lb in a roughly half and half combination of Coca-Cola and water. Then, we took it out of the pot, mixed together brown sugar and mustard, and smothered it. Then back in the oven for another 20 minutes. Remove, cover in foil, and let settle for at least 20 minutes; the juices will seep back into the ham.

I made a really quick and easy mustard sauce using the dregs of milk and cream we had left. It was about 60% cream and 40% milk. It didn’t require too much precise measuring because the sauce can be thinned with some vegetable stock, or thickened with some more roux.

I began with a roux of flour and butter; you want the roux to still be ever-so-slightly runny. To make sure the sauce isn’t too thick, take the roux out of the pot add slowly add it milk and cream, over a low heat, until it begins to thicken.

Add a pinch of nutmeg, some black pepper, a 1/2 teaspoon of English mustard, a grating of parmesan cheese (about a small cube worth) and a generous handful of parsley and thyme. Then, I added a little bit of Kallo vegetable stock cube in water.

I’m particularly rubbish at making sauces so I reckon this is quite failsafe and the ingredients can be altered to suit your list of available ingredients and your personal taste – more or less mustard, no cheese, possibly tarragon instead of parsley…

We served this with some leeks fried in butter and garlic, plain boiled veg, and roast potatoes. Best ham ever. I love snow.